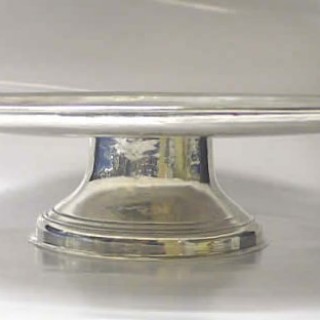 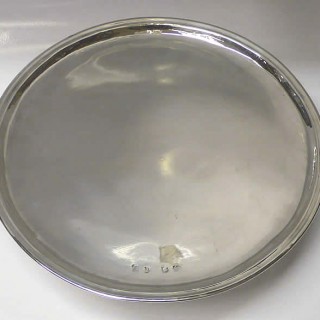 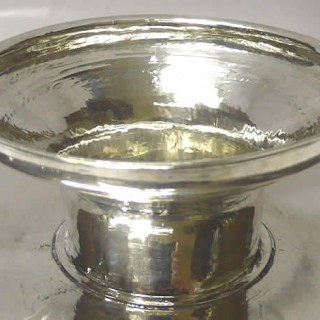 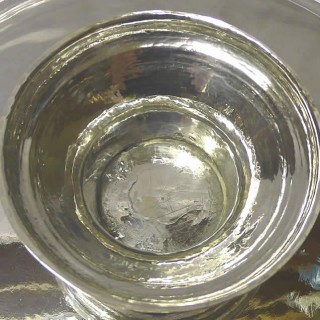 Signed – *Britannia Standard. In 1696, so extensive had become the melting and clipping of coinage that the silversmiths were forbidden to use the sterling standard for their wares, but had to use a new higher standard, 95.8 per cent. New hallmarks were ordered, “the figure of a woman commonly called Britannia” and the lion’s head erased (torn off at the neck) replacing the lion passant and the leopard’s head crowned. This continued until the old standard of 92.5 per cent was restored in 1720. Britannia standard silver still continues to be produced even today.

From the 17th century until the reign of George I, salvers (often called tazzas) were raised on a pedestal foot. By 1700 some were made with the foot unscrewing. Very occasionally this type will also have 3 or 4 feet so that the salver can be used on a lower level.

*Goldsmiths Company.
Freemen enter the Company by one of three routes:
• By Service – on completion of an indentured apprenticeship to a master who is a freeman. The apprentice will have had to bring his or her ‘masterpiece’ to the Hall for inspection by the Wardens.
• By Patrimony – for any person born after the date of a parent’s freedom, having attained the age of 25 and been elected by a Selection Committee.
• By Redemption – by application and on paying an entrance fee, having been elected by a Selection Committee.

Liverymen. A Call to the Livery is made by the Court of Assistants every two to three years, as necessary, to maintain a sufficient total within the Livery. The election process is by application and subsequent selection from the Freedom.

This lovely silver salver is in very good condition with no damage or restoration. Good colour. Both pieces are stamped with good clear silver marks. The base is lion mark only which is normal for the period.