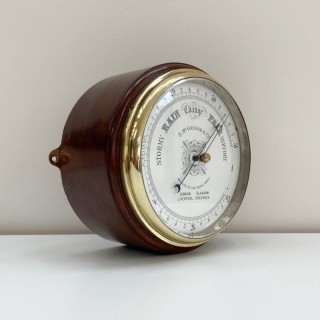 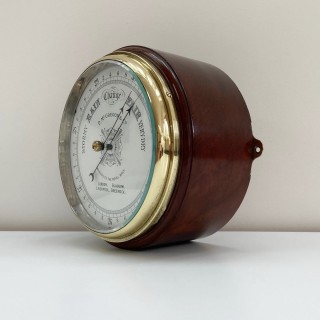 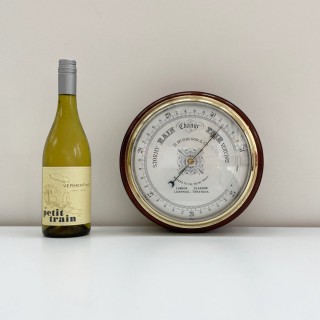 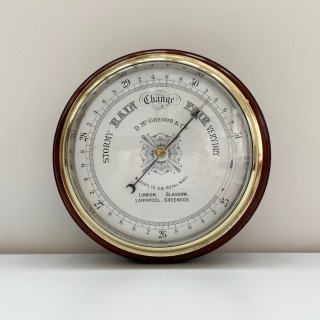 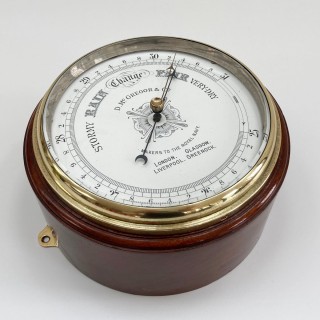 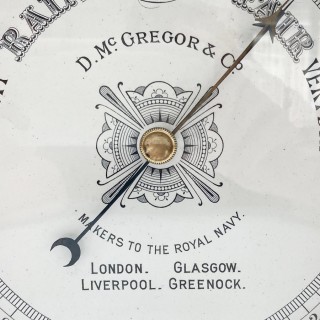 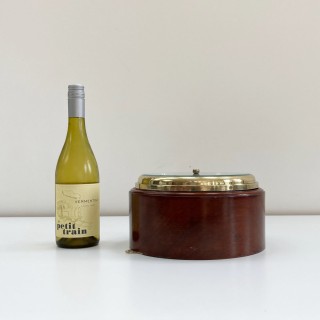 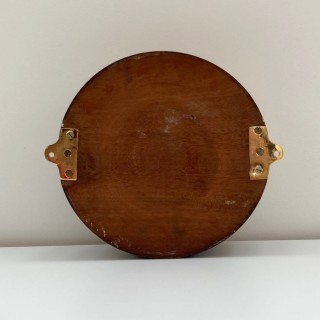 This wonderfully imposing aneroid barometer is comprised of a ten inch turned mahogany drum with chamfered edge and with a four inch depth it ensures that it draws the eye. It has a superb eight inch ceramic dial with a scale measuring 25 to 31 inches of barometric pressure and Fitzroy type weather indications around the inner circumference.

The centre of the dial is decorated with a floral type motif around which the makers name D. McGregor & Co is provided and also their trading addresses of London, Glasgow, Liverpool and Greenock. It also proudly states, “makers to The Royal Navy”.

The dial is framed within a large graduated brass bezel with a thick bevelled glass. It has a blue steel pointer with half moon detailing with brass set pointer and a large knurled brass adjuster to the centre.

An outstanding example of a Victorian aneroid.

The firm of D. McGregor & Co was formed in its earliest stages by means of a partnership between the Greenock instrument maker, David Heron and Duncan McGregor and existed from the late 1820’s through to the late 1830’s. Trading from William Street in Greenock, McGregor seems to have maintained the address following the dissolution of the business in 1836. With a period of successful trading, a Glasgow premises was opened by McGregor in Clyde Place in 1844 where he is listed as nautical instrument and chronometer maker and chart seller.

The next twenty years leading up to the death of the founder in 1867 were hugely prosperous for the company. They were involved in chronometer trials with the admiralty and supplied various instruments to the Royal Navy, the Greenwich Observatory and many overseas customers. McGregor’s personal wealth and asset base at the time of his death are testament to his success.

The business was left to his son, the twenty one year old Duncan McGregor Junior who had been working for the company since 1861 and despite his young age, the company won a silver medal at the International Maritime Exhibition at LeHavre in 1868. His continued success was probably owed in some form to the support of Malcolm McNeil Walker who had been a Manager at the Company for some years and in 1873, McGregor, Malcolm Walker and his son John Walker formed a partnership under the continued name of D. Mc Gregor & Co. The son proved equally adept as his Father and throughout the late Nineteenth Century lodged numerous compass patents and an Azimuth Reflecting Circle.

A third branch in Liverpool’s South Castle Street followed in 1879 although for reasons unclear, the Walker family decided to open up a competing business in 1885 under their own name. This company also had branches in all of McGregor’s locations. Perhaps in an attempt to find new sources of trade away from his original partners, McGregor opened a London branch in 1886 but by the early 1890’s both firms were subjected to bankruptcy proceedings. By 1898, the London branch had closed and the Liverpool premises had followed suit by 1900. The original Greenock based premises seemingly limped along until 1906 and it must be presumed that the McGregor business in Glasgow was sold away from the family at a similar time. It continued as a small concern until the 1960’s but had nothing to do with the original owners.

An inglorious end to a hugely successful business that seemed to have failed due to differences within the latter partnership of Duncan McGregor Junior. His flair for invention and social standing saw him become a Fellow of The Royal Geographical Society and a Member of the Glasgow Philosophical Society and he was also a contributor to the Royal Scottish Society of Arts. His bad luck is likely to have ensured that his name is perhaps not quite so well known today.

The latter part of the company history does however provide some useful dating evidence for this fine instrument given that the dial states all of the company’s known trading locations. With the inclusion of the London premises, it is clear therefore that this barometer could only have been manufactured between 1886 and 1898.