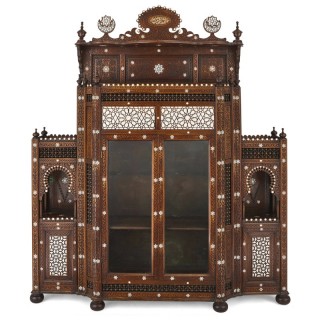 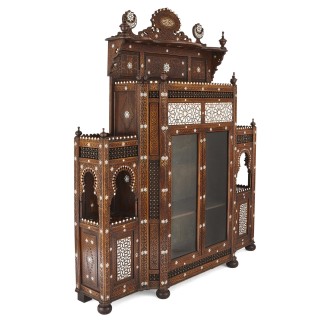 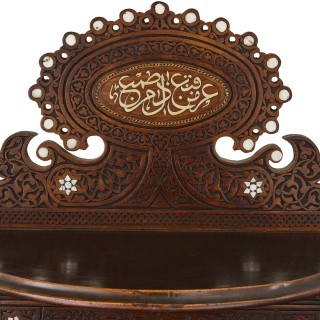 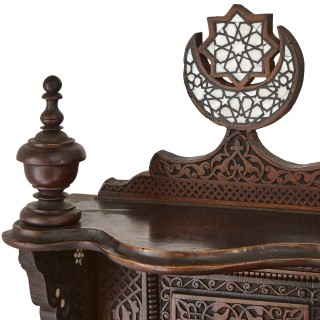 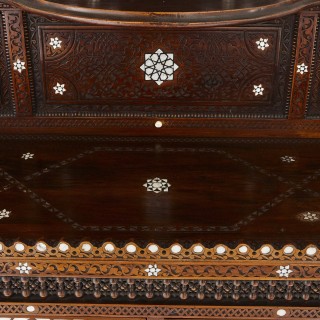 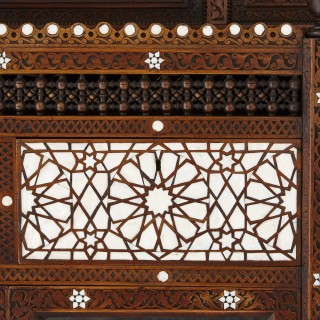 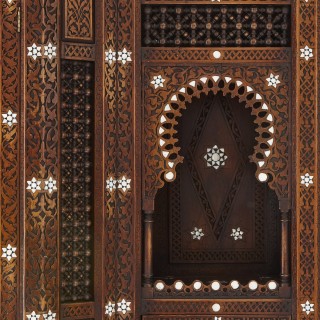 Produced in Syria during the late 19th Century, this large cabinet is designed about a tripartite structural scheme. The cabinet features a tall centre that is flanked by two smaller cupboards, the whole unit standing upon a combination of bun and block feet. The cabinet is ornately carved throughout, the decorative scheme taking the form of scrolling arabesques and vegetal motifs, elaborate geometric tessellations, and stylised Arabic calligraphic inscriptions. The ornamentation of the cabinet is furthered by the inclusion of mother-of-pearl inlay throughout its façade: geometric mother-of-pearl inlays are present upon the doors of the flanking cupboards and above the doors of the primary locker, and mother-of-pearl lozenges form the basis of six- and eight-pointed stars and medallions of a variety of forms. These motifs complement the scheme of the wood carvings throughout. The interlaced geometrical style of mashribiya windows is present in the guise of carved wood panelling along the top, sides and base of the cabinet.

The central unit of the cabinet includes a spacious compartment with a single shelf, set behind a pair of glazed doors. The top of the cabinet, as well as the top of the side cupboards, is crenelated and the back panel of the unit extends upwards to create a richly adorned canopy, crowned by finials. The central finial includes an Arabic inscription, while the flanking finials feature star and crescent motifs produced from mother-of-pearl tessellations. The side cupboards feature two small mother-of-pearl fronted lockable doors, horse-shoe arch niches and decorated back boards.