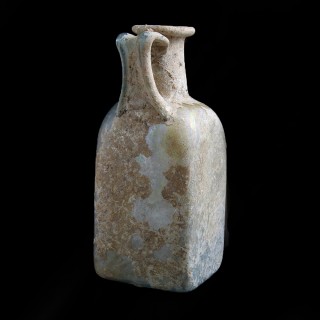 A beautiful Ancient Roman mould-blown glass bottle. The vessel features a rectangular body, a short neck and a folded, flaring rim. One applied handle rises vertically, extending from the rim to the body. A geometric decoration moulded in relief, consisting of five rounds, is visible to the base.
During the Roman Empire, a large part of ancient glassworks was designed for tableware use, in particular for carrying and serving water and wine at banquets. These types of bottles existed in various dimensions and shapes. In the Western Roman Empire cremation was practiced: sometimes bottles like these were also used for cinerary purpose.