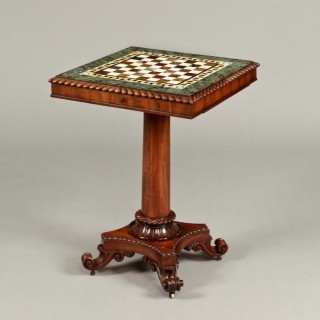 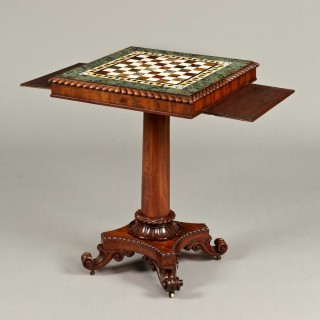 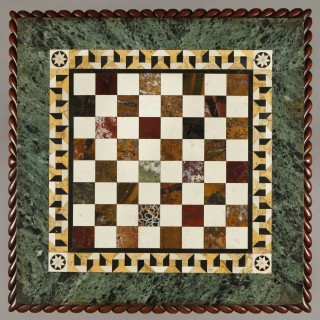 Constructed in a well figured goncalo alves, rising from scrolled legs on a castor shod tripartite base, the tapering central column rising from a lobed, gadroon and lotus leaf carved base, piped with an ‘egg and dart’ moulding; the gadroon carved frame having an extensible slide, and housing an Italian marble inset chess board within an Antico Verde framework.
Circa 1835

The Gillows Archives show several tables designed to house a hardstone games boards, and most prolifically in the 1822-1825 sketch and estimate books.

His talents as both a cabinetmaker as well as innovative designer brought him early success, and, bringing his two sons, Richard & Robert, into the business, he expanded his Lancaster showroom, to include another in London’s Oxford Street. The clientele now included the Government, the aristocracy and the burgeoning middle classes. His furniture had gained its’ reputation for excellence of workmanship, and materials employed, and coupled with his insistence on being at the cutting edge of design kept the company to the fore throughout its’ one hundred and seventy year history from 1730 until its’ amalgamation with Messrs S.J. Waring in 1900. Throughout this period it was the largest manufactory of furniture in England.

The fortuitous survival of the Gillows records in their Estimate Sketch Books show over 20,000 designs and are preserved in the City of Westminster Library. Furniture made by Gillows is to be found in Royal collections and museums throughout the world. A scholarly two volume exegesis of the firm, ‘Gillows of Lancaster & London’ by Susan E. Stuart was published by the Antique Collectors Club in 2008.