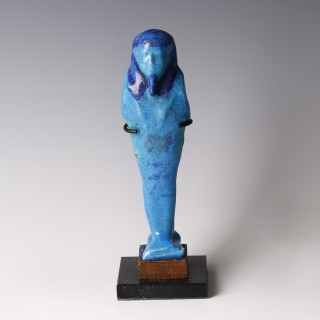 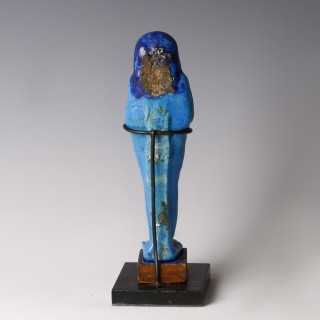 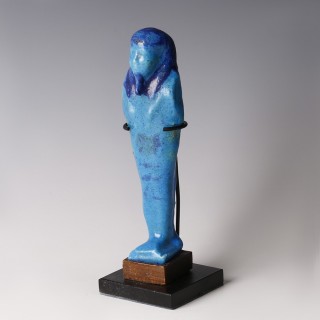 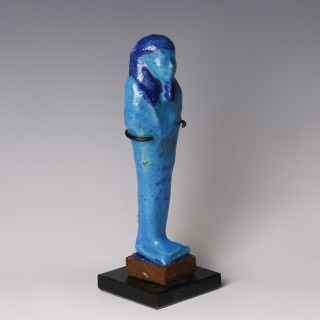 An ancient Egyptian faience ushabti, decorated in a bi-chrome thick glaze consisting of a light blue body with added details in a darker, purple-hued blue. The ushabti is depicted in typical mummified form, with its hands protruding slightly from its shroud. They are clasped around a pick and a hoe. The ushabti wears a tripartite wig, decorated in a dark blue hue. His false beard has also similarly been coloured. The facial features are not well defined but are typical of the period, with more rounded cheeks and an upturned nose. A crude attempt at a hieroglyphic inscription has been added to the body, again in dark blue pigment. Unfortunately, this is too unclear to decipher.

Shabti production during the late Dynastic period and Ptolemaic period diversified, with the production of bi-chrome shabtis from the 30th Dynasty onwards. Such figurines are defined by a thicker glaze compared to previous shabtis.

The term ‘ushabti’, rather than shabti, was used from the 21st Dynasty onwards due to a change in function for the statuettes. They were to be known as ‘answerers’, expecting to answer the call of their master. Shabtis (and Ushabtis) were figurines in mummified form, which were placed in Egyptian tombs to perform any manual labour required by the deceased in the afterlife. In the most elaborate Egyptian tombs, there were thirty-six overseer figures and 365 worker dolls.

Very fine. Some encrustation to the reverse. Some staining to the base of the feet from previous stand attachment and an area of lost pigment. Comes with modern, custom-made stand and previous antique wooden stand (detached). Measurements given are for the shabti alone. The figure with the stand measures 21cm in height.