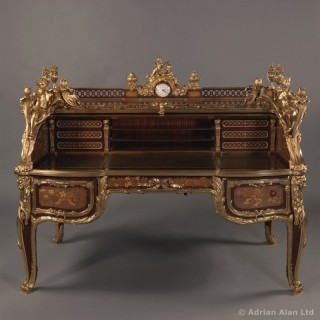 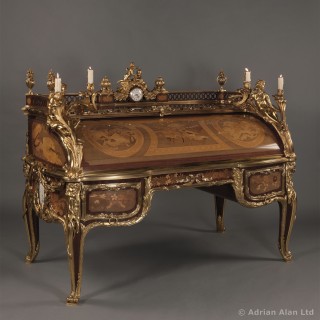 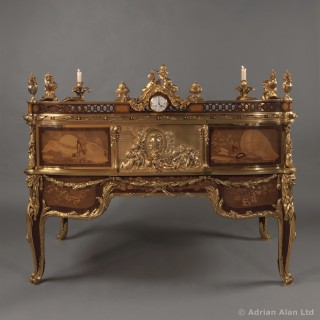 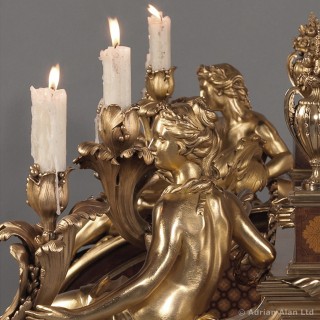 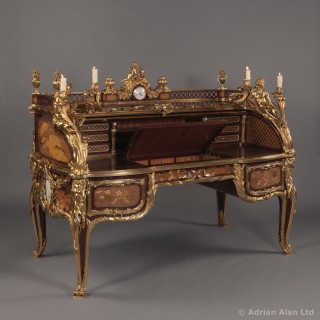 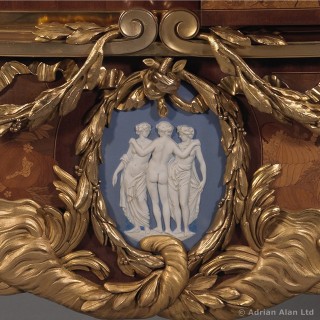 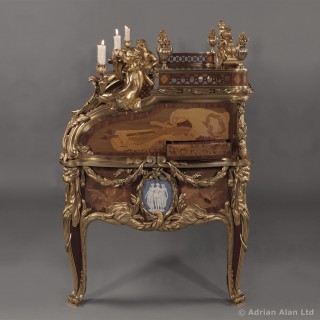 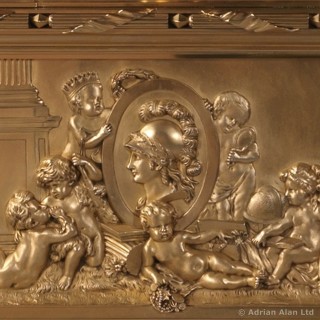 Le Bureau Du Roi – A Magnificent Secrétaire à Cylindre, by François Linke, after the model supplied to Louis XV by Jean-François Oeben and Jean-Henri Riesener. Undertaken by François Linke, circa 1922 and left unfinished at his death, recently completed through an ambitious restoration program with the assistance of the Linke archive.

The Bureau du Roi or Kings Desk is perhaps the most famous piece of furniture ever made and one of the most luxurious creations of the eighteenth century. The desk was ordered by Louis XV in 1760 from the Royal cabinet maker Jean-François Oeben for his private study and was completed approximately nine years later by Oeben’s successor Jean-Henri Riesener. Adorned with lavish gilt-bronze mounts and remarkable symbolic marquetry, this magnificent cylinder bureau became an icon of Royal absolutism. The breath-taking ambition of the design, combined with its regal history, guaranteed its fame to the present and made its recreation, the zenith of 19th century ébénistes ambitions.

The first copy of this celebrated Bureau du Roi was made in Paris by Carl Dreschler for the 4th Marquess of Hertford between 1853 and 1870 and is now in the Wallace Collection, London. The complexity and fame of the Bureau du Roi led to the finest cabinet makers of the 19th century vying to recreate this spectacular tour de force. An important example was made by Henri Dasson in 1875 and exhibited at the Exposition Universelle of 1878, while Joseph-Emmanuel Zwiener exhibited his model at the 1889 exhibition. Patrons for such prestigious work included Ludwig II of Bavaria and Russian Tsar Nicholas II.

François Linke, however, was perhaps the ébéniste most inspired by the Bureau du Roi; three examples of the desk are noted in his green registre, completed in 1902, 1910, and 1922. The registre also notes a fourth unfinished desk, which would have been started at the same time as the example supplied to the King of Egypt in 1922, and restarted after the liberation of Paris on December 31, 1944. Interestingly Linke notes this desk in his Daybook, with no costs indicated for casting, mounting or chasing of the bronzes, confirming it as the present example.

In addition to recreating the celebrated desk itself, Linke in the ambitious manner of his 18th century precursor Guillaume Benneman, adapted elements of the design to create a bureau plat, a pedestal, a commode, a bergère, a large bibliothèque, and two pianos, all inspired by the design and mounts of the original desk.

Of the three original completed bureau’s, the desk supplied to the King of Egypt remains today in the Abdeen Palace, on display in the King of the Belgian’s suite. Of the earlier examples, one is noted as having been in the collection of the Duke of Buccleuch at Boughton House, Northamptonshire, England in 1934; the second, in 1967 in the possession of Madame Devisme, Paris, and subsequently sold in 1976, both of these desks now reside in important private collections.

As was his practice, Linke created two carcasses at the same time; the carcass and body of the present desk would have been created at the same time as the desk completed and supplied to the King of Egypt for the Abdeen Palace. The body of the desk was completed and the marquetry panels inlaid, but the costly mounting of the desk with gilt-bronze would have been postponed until a suitable client was found. Interrupted by the great depression of the 1930’s and then the war, the desk, although fully assembled in 1944, was left ultimately unfinished at Linke’s death.

Given unprecedented access to Linke’s original master bronze patterns, held in the Linke Archive, the magnificent gilt-bronze mounts on the present desk have been cast and finished though an ambitious restoration programme painstakingly undertaken over the last six years to complete this last great work by Linke. The moulds for the mounts were destroyed following the casting, making this a unique and exceptional undertaking that can never be repeated. The present Secrétaire à Cylindre, finely restored and completed to Linke’s exacting standards, therefore affords buyers a unique opportunity to own an exceptional example of one of the greatest pieces of furniture ever conceived, made by the finest cabinet maker of the 19th and 20th centuries.

Without doubt one of the most important pieces of furniture ever made the Bureau du Roi was ordered by Louis XV of France in 1760 for his private study.

The construction of this extraordinary piece was started in 1760 by Jean-François Oeben, and finally delivered to the King in May 1769 after its completion by Oeben’s successor, Jean-Henri Riesener. The desk, which took numerous craftsman nine years of meticulous work to bring it to perfection, dominated Riesener’s work during this period. In addition to the intricate marquetry and finely cast mounts, the roll-top desk mechanism was especially ingenious. It allowed the King to lock all his papers with a single turn of the key while cleverly still permitting servants access to the inkwells through the two side drawers.

The key an object of great beauty in its own right was designed by Riesener with Louis’ double ‘L’ cypher’ and was kept constantly in the pocket of the king. Originally the key had at its centre a small Sèvres porcelain medallion representing the king which was removed following the revolution.

Originally located in Louis XV’s study at Versailles it was moved to the office of Napoleon’s assistant in the Tuileries in an inventory of 1807. It was subsequently moved again to the grand salon at the Palais des Tuileries for a short time until transferred to Saint-Cloud by Empress Eugénie in 1855. In August 1870 it was at the Musée du Louvre before being finally returned to Versailles in 1957.

The extraordinary bronze mounts on the original desk representing Apollo and Calliope were modelled by Jean-Claude Duplessis père and cast and chased by Louis-Barthelemy Hervieu (maître 1749). As Riesener’s notes indicate, there were no patterns for this desk as it was a pièce unique and the wax models were inevitably destroyed in the casting process.

Christopher Payne illustrates a bronze master model in the Linke Archive for the figure of Calliope, indicating that it corresponds exactly to the bronze master pattern used for the bronze mounts on the first nineteenth century copy, made by Dreschler in 1853, for Lord Hertford. It is possible, that as Henry Dasson took over Dreschler’s workshop in 1867, that he may also have acquired the bronze master patterns at this time and that they were subsequently acquired by Linke, however, there is no indication of how Linke obtained the models for these important bronze mounts in his records. (See Mestdagh p.77 & Payne p. 218).

Several alterations to the original design were made by Riesener himself during the post-revolutionary turmoil of 1794, all of which were reflected in subsequent recreations of the desk. He removed the medallion with the king’s effigy around the clock and replaced the intertwined ‘L’s on the side with Sèvres porcelain plaques imitating Wedgwood Jasperware plaques of the Three Graces and replaced the marquetry ‘attributes of Royalty’ in the centre of the roll-top with scientific instruments.

Meyer, D. Versailles Furniture of the Royal Palace: 17th and 18th Centuries’ Vol. I, p. 122-131; and R. Startmann-Döhler, Jean-François Oeben, p. 76, for illustrations and discussions on the 18th century model circa 1760-1769, by Jean-François Oeben and Jean-Henri Riesener.