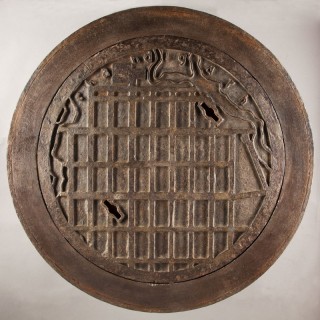 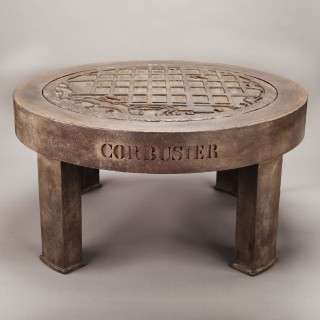 The cast iron manhole cover with the original map of the first Modernist City, Chandigarh, designed by Le Courbusier, is here set in a unique, sympathetically designed table base.

The city of Chandigarh in the foothills of the Himalayas, in the Punjab, was commissioned by Nehru, the first Prime Minister of independent India, in the 1950’s.

Le Corbusier, the Modernist architectural visionary drew up the master plan. On his first visit to the area he was enraptured by the unity of life in India and during his week long stay he filled thirty-two pages of his large sketchbook with the main concepts; the architecture was to be “Neither English, nor French, nor American, but Indian”. As he later commented “The last touches have been put to the plan of what will become a city unique in the world, to be realized here in simplicity and the joy of living. To do such a thing, we had to come to India!”

Le Corbusier’s second in command was Pierre Jeanneret who had the understanding and technical ability to realize the dreams of Corbusier in what was a remote area with an inhospitable sub tropical climate; dry for ten months and with the monsoon in July and August.
This team did not work for great financial reward but were inspired by idealistic principles to build the first post-independence, modern, progressive city, a new forward looking capital for the East Punjab (Lahore had become part of Pakistan during partition) and neighbouring Haryana.

As well as planning the complete city Corbusier also designed the Capitol which incorporates the Parliament, The Secretariat, the Governor’s Palace and the Justice Court, also the Museum and Art Gallery, the Government College of Art and the Chandigarh College of Architecture.

With many parks and water features, the city is based on rectangles, or sectors, which are intended to be self-sufficient neighbourhood units bound by roads, and every aspect of the city, every tiny detail, was designed for Chandigarh including all the street furniture and the manhole covers which feature the master plan of India’s first Modernist city.