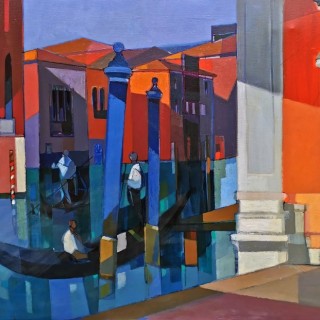 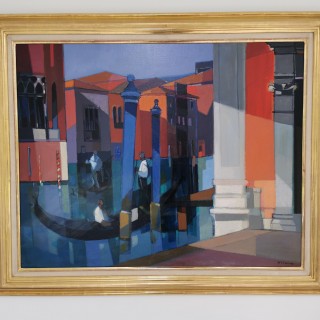 Camille Hilaire was born in Metz in 1916. As a teenager he was fascinated by the works of Hans Holbein and Albrecht Durer, copying them from books he found in Metz city library. His own work was soon discovered by Nicholas Untersteller, a local artist who would go on to become the Director of the École des Beaux Arts in Paris. He encouraged Camille Hilaire to go to Paris and study art there.

Between 1933-34 Camille Hilaire travelled throughout Italy and France with the aid of a scholarship. There he continued painting, inspired by the art he discovered in the two countries.

In 1939, whilst in Paris, he was drafted into the army at the outbreak of World War II. He was captured, imprisoned and escaped, returning to Paris. During the remainder of the War he enrolled at the École des Beaux Arts, simultaneously studying with André Lhote in his studio and later becoming his assistant.

By 1947 he had moved to Nancy where he became Professor of Drawing and Decorative Composition at the École Nationale Supérieure d’Art. He subsequently became a Professor at the École des Beaux Arts in Paris in 1958. This appointment enabled him to travel and exhibit widely. He particularly loved Normandy, the South of France and Venice. His subject matter included landscapes, still life, nudes, horse racing and the orchestra.

In a very full career Camille Hilaire produced many oil paintings, watercolours, prints and tapestry designs. The art critic André Ruellan wrote of his tapestry designs “As for the tapestries, his whole profession as a graphic artist and his desire to research merged into splendid works which constantly appeal to the eye thanks to their technical success of pure harmony and which represent the artist just as well as his lithographs, an astonishing outcome”. He also designed for various public buildings in France many mosaics and stained glass windows, as well as illustrating a wide variety of books.

The paintings of Camille Hilaire are poised somewhere between the figurative and post cubist influences. His colours are luminous and his compositions captured the essence of his subject matter through the use of strong line, planes and vibrant fresh colour. “He expresses a certain gaiety which is natural to him through the use of pure colours and the choice of subjects: beaches, musicians, rivers, ports, women in front of mirrors…He gives the shadows a geometric character and surrounds the shapes with a halo of precise outline” Connaissance des Arts magazine.

Throughout his life Camille Hilaire exhibited widely both in group exhibitions such as the Salon d’Automne from 1942, Salon des Indépendents from 1945 and the Salon de Mai from 1951. He had many one-man exhibitions, the first being held in the Galerie Vallotton in Paris in 1951. Over the years he continued to exhibit in solo shows in Paris, Geneva, Cannes and Nice. His work is held in public museums in Paris, Metz, Nancy and Poitiers.

Camille Hilaire died in Normandy in 2004.