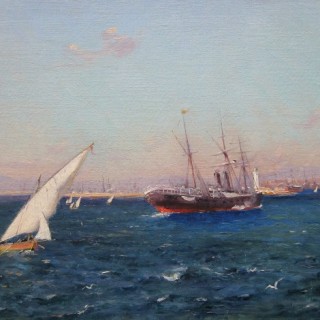 Gaussen trained at the École des Beaux-arts of Marseille under the direction of Magaud and Guindon, where he studied with Jean-Baptiste Olive.

A local celebrity, he was one of the famed painters of Marseille and was appointed conservator of the Musée Cantini of Marseille. He widely participated in the numerous exhibitions of the Salon de la Société Coloniale des Beaux-Arts. He was appointed Peintre Officiel de la Marine in 1928, as well as Officier de la Legion d’Honneur.

As a member of the Salon des Artistes Français, he exhibited at the Salon from 1893, with his views of the beaches and ports of the Côte D’Azur featuring prominently. Gaussen’s art is sober but inspired by a great love for nature, both terrestrial and marine. One of his favourite subjects was La Corniche, the superb sea cliff that stretches east from Cap Ferrat, where the mountains plunge dramatically into the Mediterranean sea. These paintings exemplify his love of this part of the French Riviera.

Many of his works were acquired by the French State.