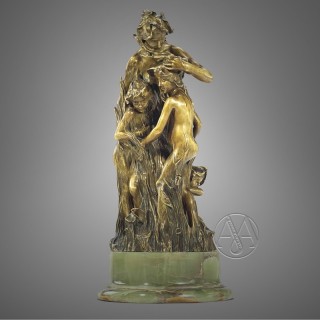 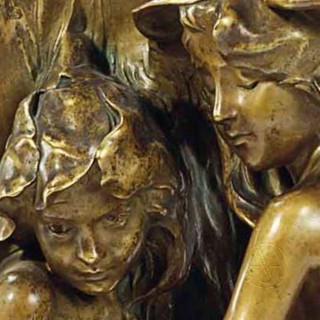 One of the most celebrated works by Larche, ‘Les violettes’ was commissioned by the French government, and it was exhibited at both the Paris Salon of 1899 and the Exposition Universelle in 1900, where he was awarded the gold medal for sculpture. The original plaster group is conserved in the Museé d’Orsay.

The son of an ornamental sculptor, François-Raoul Larche (1860-1912), was a well-known Art Nouveau sculptor born in St.-André-de-Cubzac. He entered the Ecole des Beaux-Arts in Paris in 1878, studying under François Jouffroy, Eugène Delaplanche and Alexandre Falguière.

Larche was a regular exhibitor at the official salons beginning in 1884, and was awarded the Second Grand Prix in 1886 at the Prix de Rome competition. He received a gold medal at the Exposition Universelle in 1900.

Raoul Larche produced works in a number of different styles but is best known and celebrated for his highly accomplished naturalistic Art Nouveau style, influenced by famous dancers of the period such as Loie Fuller.