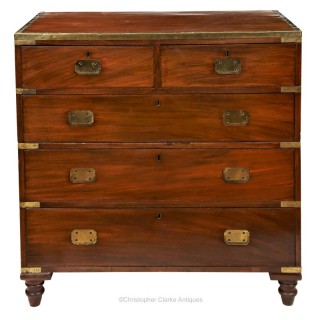 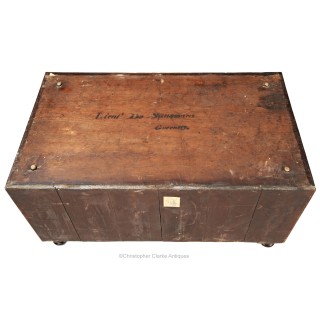 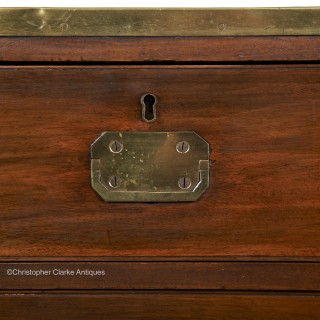 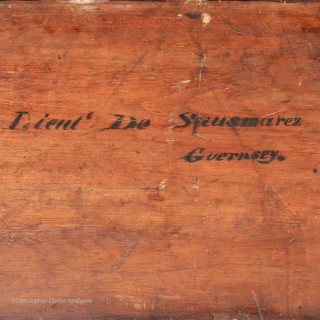 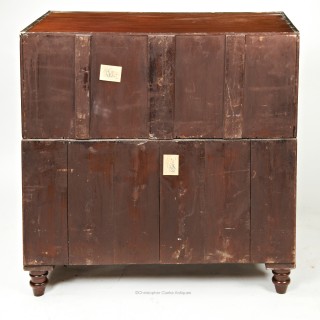 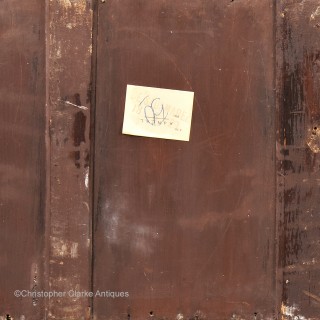 The size and handles of this chest of drawers point to its earlier date and this is confirmed by the owner’s name De Sausmares painted to the top of the bottom section. The De Sausmares family, also known as Saumarez are a well-known Guernsey family. A number of them gained recognition in the navy and army. Thomas Saumarez (1760-1845) was appointed Captain in 1779, taken prisoner at Yorktown and finally was the Inspector of the Guernsey Militia. Admiral James Saumarez (1757-1836), 1st Baron de Saumarez was Admiral of each of the three fleets at one time or another. Thomas Le Marchant Saumarez (1803-1834) died in action in Uruguay. Richard Saumarez (1791-1864) was in the navy and also made the rank of Admiral. The Hon. John St. Vincent Sumarez enlisted as a 2nd Lieutenant in 1824 in the Rifle Brigade and made full Lieutenant two years later and went on to become a Colonel. His son the Hon. Gerald Le Marchant Saumarez enlisted in the East Kent Regiment in 1882 and we have featured his watercolours in past catalogues.

This chest is well made, with the screws lining up on the brass strap work and to the handles a sign of the cabinet maker’s attention to detail. The flush campaign handle is an earlier type that we do not often see. The carrying handles are replaced but to the same design as the removed originals. The top half of the chest is shorter in height than the bottom and the replaced feet are removable. The backboards to the bottom section were also replaced a number of years ago. It is probable that the brass edging has been removed and re-fitted at some time. This was likely due to shrinkage to the chest’s top. The back has some later A&N CSL depository labels also bearing the name De Saumarez.

A good looking chest from an important Guernsey family that was likely used by more than one generation. Circa 1835.