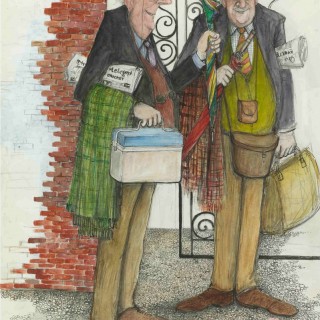 Original watercolour by Sue Macartney Snape Sue Macartney-Snape was born in Tanzania, brought up in Australia and now lives and paints in London. John Julius Norwich called her a “master of caricature” and said her paintings “illustrate the English social scene more brilliantly and with greater accuracy than those of any other painter working today.” For 14 years she has illustrated The Telegraph Magazine’s ‘Social Stereotypes’ column. Nine books of her original stereotypes have been published since 1994 and hundreds of thousands of copies have been sold. It is with a keen eye and a quick wit that Sue makes her very English observations. Ned Sherrin wrote in 2004 “Sue Macartney-Snape’s observation suggests that she has eyes on stalks”. Gyles Brandreth wrote in 2007 “Sue Macartney-Snape belongs to a tradition that runs from William Hogarth to Ronald Searle”. Sue won the 2004 Pont Award for drawing the British character and has been acclaimed as the Wodehouse of art. She has had sell out exhibitions with The Sloane Club and has had many commissions, including ones from Glyndebourne, The Metropolitan Opera and Barbara Amiel – wife of Lord Conrad Black. “A dazzling combination.” – Jilly Cooper “Mather and Macartney-Snape are not so much observers, more collectors, pinning their victims like butterflies in a display cabinet … Very enjoyable.” – Michael Parkinson Daily Telegraph revue – http://www.telegraph.co.uk/art/what-to-see/art-satire-sue-macartney-snape/sue-macartney-snape/