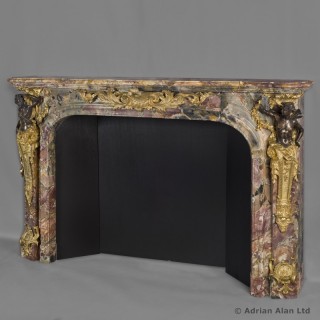 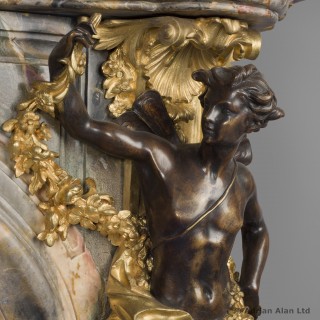 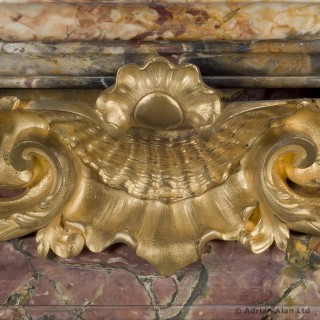 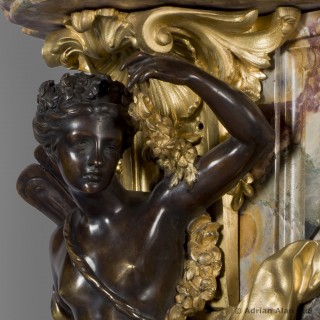 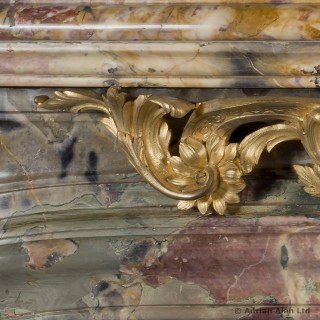 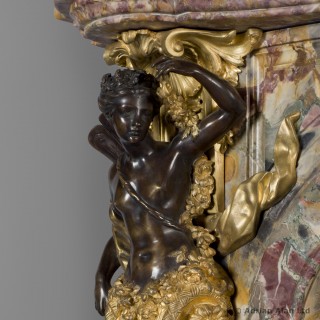 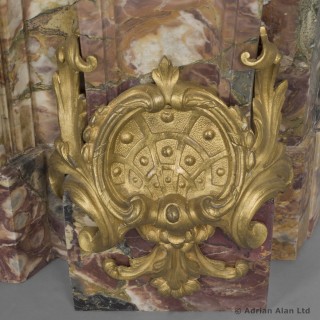 A Fine Louis XV Style Gilt and Patinated Bronze Mounted Marble Fireplace With Mounts Depicting Flora and Zephyr, After the Model by Verberckt and Caffieri at Versailles.

This rare and impressive fireplace has a serpentine Breccia Pernice mantle over an arched lintel centering on a gilt-bronze coquille mount, issuing scrolling acanthus and foliate vines. The jambs are mounted with patinated bronze Herm figures holding aloft floral vines above tapering gilt-bronze supports cast with rosettes and scrolling vines. The jambs are raised on a stepped base with gilt-bronze foliate and cartouche mounts.

The fireplace is based on a chimney-piece by Jacques Verberckt with gilt bronze mounts by Jacques Caffieri, supplied for the bedchamber of the Dauphin at Versailles in 1747. A very similar nineteenth century example, with gilt-bronze and dark patinated bronze figures of Flora and Zephyr to the jambs, is in the Wallace Collection, Hertford House, London. Another example, dating to 1860, was installed in the salon d’Apollon at the Tuileries. A similar fire surround was also installed in the Kings’s Study at Ras al-Tin Palace in Egypt, the interiors furnished by François Linke – see C. Payne, ‘François Linke: The Belle Epoque of French Furniture’, (Woodbridge,UK), 2003; p. 289.

Jacques Verberckt (1704-1771) was a sculptor and decorator of Flemish French origin. Born in Antwerp to a family of silversmiths, he moved to Paris in 1716 and took up a position in the Bâtiments du Roi, as an ornamental sculptor and virtuoso carver. He gained favour with the Premier Architecte du Roi, Jacques Gabriel V, and his son Ange-Jacques Gabriel and worked on many of the royal châteaux. He was approved (agréé) by the Académie Royale in 1733.

Jacques Caffieri (1678-1755) was the tenth son of Phillippe Caffieri (1634-1716), who emigrated from Naples at the request of Cardinal Mazarin to decorate the interiors at Versailles. He was elected to the Académie de Saint-Luc as a sculptor, and thus created many of the original designs that were proprietary models of his foundry.

From 1736, when he was appointed fondeur-ciseleur des Bâtiments du Roi, Caffieri remained in the employ of the French Crown.