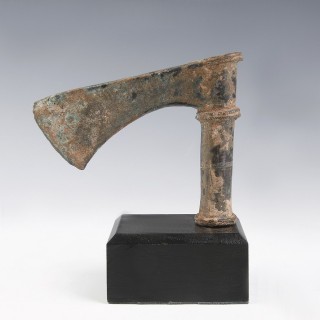 A Luristan bronze shaft-hole axe. The shaft is decorated towards the top with a notched ridge in proud relief, matching a similarly decorated rim at the top and a further ridged rim at the base. The shaft has an additional narrow band of lightly engraved chevrons around the lower half.

Luristan bronze comes from the province of Lorestan, a region situated in the area of modern South-Western Iran. In ancient times a number of nomadic populations, such as the Medes, the Kassites and eventually the Persians, settled in the area. Due to the nomadic nature of the tribes, none of the Luristan bronzes were of great size, since it was required for them to be light and portable. Their artwork mainly comprises ornaments, vessels and weapons. Cast spike-butted axes are hallmarks of Luristan bronze weaponry during the First Iron Age Period, between 1200 and 1000 BC. Most of Luristan bronze items have been recovered in funerary contexts.

Very Fine: Complete and intact with good stable metal; the surfaces with areas of slight roughness and light accretions.