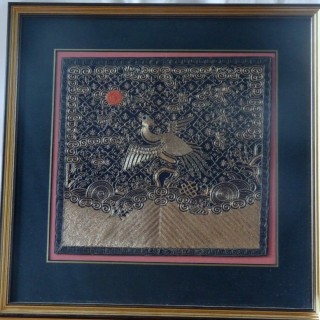 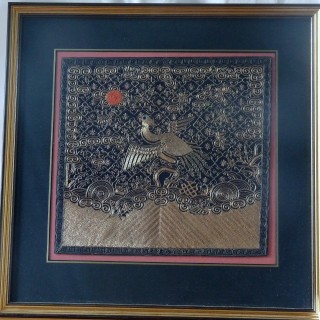 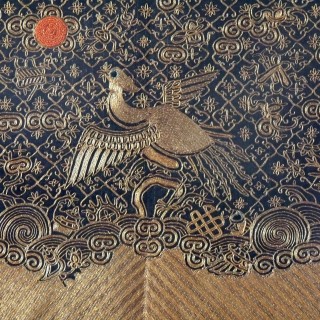 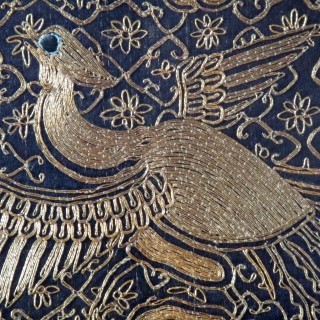 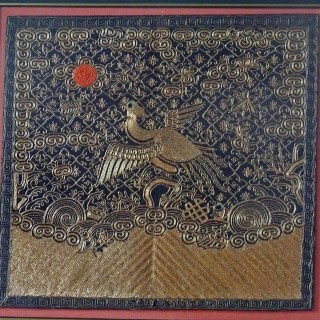 Chinese Square or Mandarin Rank Badge from the back of a Male’s robe showing the fifth rank Silver Pheasant.
Embroidered in Couched gilt thread with intricate detail to show the bird perched on a rock above a turbulent stripy sea. the background shows ruyi headed clouds on a trellis style back ground with many auspicious emblems associated with Buddhism. These items include the wheel of law, the endless knot, fan and castanets.
The badge is for a civil ranked Mandarin of the fifth rank as it shows the Silver pheasant. The fifth rank official would have been one of the following: a Deputy Director of the Hanlin and Imperial Institutes, Inspector of Salt Distribution, a Sub Prefect, Assistant directors for Boards and Courts, Circuit Censors or Assistant Librarians
The badge is made with all gilt thread and the sun disk is depicted with tight coiled very small coral beads.
As the badge is very ‘cluttered with charms it would imply that it was used towards the end of an Imperial reign as the Emperors preferred more plainly embroidered badges

From a private English Collection