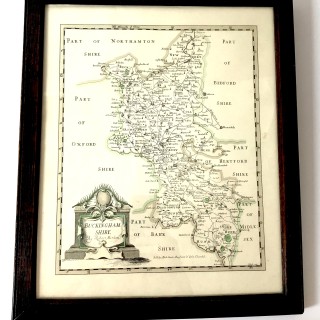 Map of Buckinghamshire by Robert Morden. 1651-1703. This edition C18th. First published by Robert Morden in 1695, which appeared in Camden’s Britannia (London: Swale, Awnshaw & Churchill, 1695 – 1772). Bishop Gibson described the maps from this series as “much the fairest and most correct of any that have yet appeared”.

This is an original copperplate engraving with later hand colour. 30 cm x 24 cm