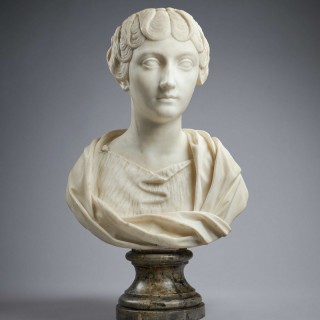 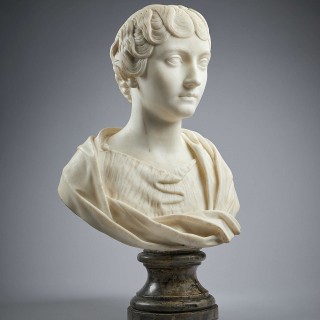 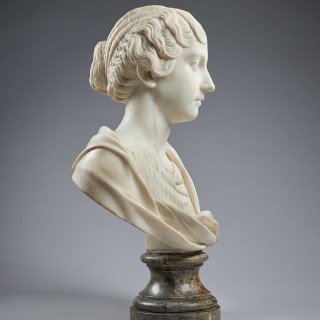 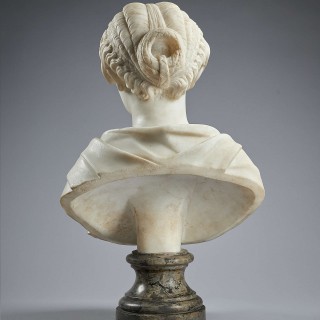 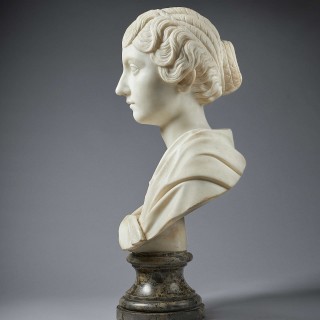 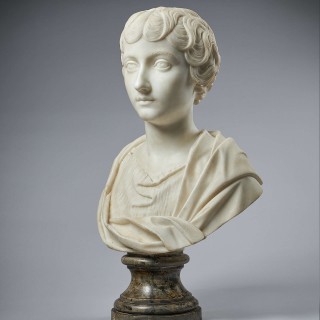 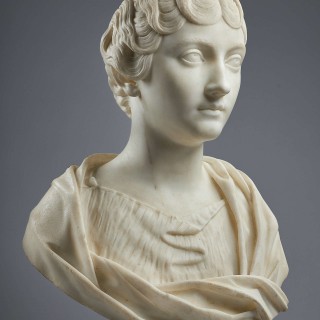 Marble Bust of Faustina the Younger

This well-executed bust is after the ancient portrait of Faustina discovered at Hadrian’s Villa at Tivoli and now displayed in the Hall of Emperors at the Capitoline Museum (inv. MC0449). Copies of this famous portrait became a popular souvenir for Grand Tourists from the mid-eighteenth century. A number of high-quality replicas, some of which are closely comparable in style and execution to the present bust, were carved in the studio of the English sculptor, Francis Harwood (1726/27-1783), who worked in Florence in the second half of the eighteenth-century (see Roscoe, op. cit.).

Annia Galeria Faustina Minor (c. A.D. 130-175), known as Faustina the Younger, was the daughter of the Emperor Antoninus Pius and his wife Anna Galeria Faustina the Elder. Initially engaged to marry the future Lucius Verus, after Hadrian’s death she was instead married to Antoninus Pius’s adopted son, the future Emperor Marcus Aurelius, in A.D. 145. As Empress, she was a companion of her husband on several military campaigns and was regarded with deep respect both by the Emperor and his soldiers, bearing the title mater castrorum (‘mother of the camp’) during their campaigns along the Danube. She bore her husband at least twelve children, of whom six – five daughters and one son, Commodus – survived her.

Faustina died during the winter of 175 after an accident at a military camp in Halala, Cappadocia, in Asia Minor. She was buried in the Mausoleum of Hadrian in Rome and was given divine honours, her statue being placed in the Temple of Venus and the city of Halala being renamed Faustinopolis. This divine status may account for the prolific number of contemporary Roman portraits of Faustina; while in the eighteenth and early nineteenth century the present regal image of the beautiful young Empress became a favourite of Grand Tour collectors.

Please note, we offer free delivery of this item within London and the Home Counties. We can provide quotes for shipping elsewhere in the UK and overseas.

Marble Bust of Faustina the Younger