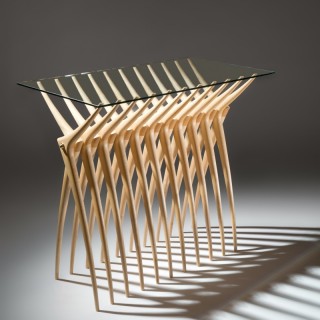 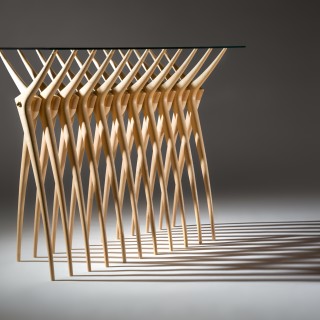 Martin Gallagher’s work is handmade and fuses together the basic elements of wood and glass using a combination of traditional techniques, modern forms and technology to create distinctive pieces of furniture. A constant source of inspiration to him is the rugged landscape around where he lives and works on the North West coast of Ireland. Geometric shapes, clean crisp lines and repetition of shape and form found in nature are key themes in his work and Martin’s emphasis on using quality modern materials and colour give his work a fresh contemporary aesthetic.

Currently Martin is exploring the qualities of both native and imported timber, enhancing the natural qualities using shape and finish and increasingly his work has taken on an organic character. ARDÚ was inspired by skeletal structures. The pale tight-grained maple gives a lightness of form to the ribs which are separated by brass ‘vertebrae’ and the glass surface allows a visual connection with the table from all angles. A balance is achieved between the function and the sculptural form of the piece, resulting in a table which is sensually appealing, beautiful to look at and satisfying to use.