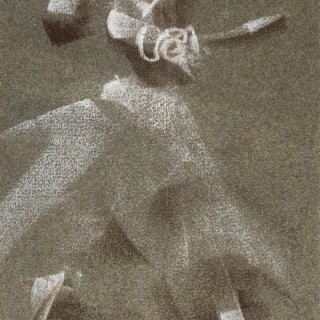 Mary Krishna (nee Oldfield) studied at the Royal College of Arts in the late 1920s. It was there that she met her husband, the Indian artist Roop Krishna. They moved to his native Punjab where they continued their studies at the Lahore School of Fine Arts under the Indian watercolour painter Abanindranath Tagore. They were members of a group of early 20th century artists in India who experimented with Western influences, blending them with traditional Indian techniques and construction. Her subjects included gods, animals and often dancers depicted in an animated or spinning vortex of movement. They moved permanently to London in 1946 and she exhibited regularly at the Royal Academy between 1955 and 1967.