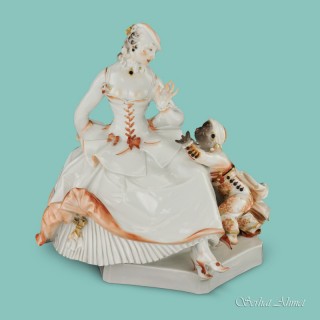 A very rare Art Deco Urstück (meaning example) group of a lady holding a golden ball behind her back in her right hand, which the Moor boy is appealing for her to return. Decorated in orange and gold and signed and dated by Scheurich for 1921.

This group was first modelled by Paul Scheurich (New York 1883 – 1945 Brandenburg) in 1919 and was executed in three colour forms; in white, in orange and gold and in polychrome.

The present group is incised Scheurich 19 to the side of the base, with the signature Scheurich 1921 in black script to the top of the base, both at the reverse side. The base is impressed von11UR=STÜCKEN Nr 4 to indicate that this was the fourth of the first eleven models of this group made under the guidelines described above. Blue crossed swords to base, circa 1921.

In 1918 it was decided that the first eleven models of new sculptures of particular aesthetic value ‘will be made under the particular supervision and with the collaboration of the artist whose signature they will bear, and will be sold accordingly at a higher price’.

An example of the orange and gold form is illustrated on page 49 of Meissener Manuskripte VIII by Johannes Raphael, published by the Staatliche Porzellan-Manufaktur Meissen.