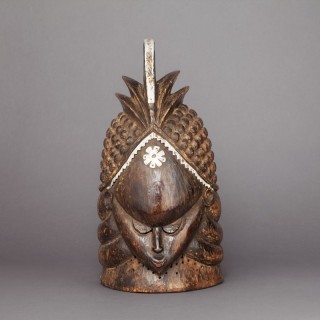 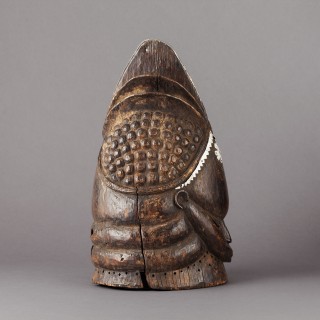 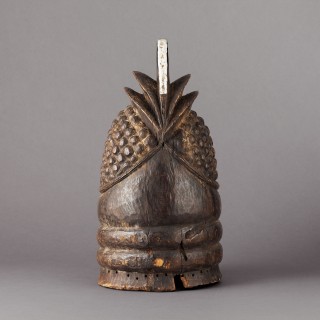 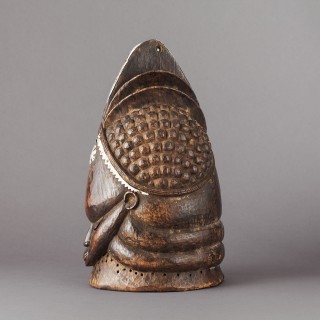 This is an unusual mask with the ridged hairstyle and hairline ornamented with strips of beaten silver coloured metal (for a similar example see Ruth B. Phillips’ book p. 117 6.4 , photograph taken by Alldridge circa 1900).

These sowei masks are worn by members of the Sande women’s society and have an idealised female face whose features conform to conventions symbolising religious and philosophical ideals as well as beauty. For instance as a general rule the following conventions are adhered to:

Full forehead – denoting wisdom and intelligence
Down cast eyes – associated with the mysterious essence of the spirit which inhabits the mask.
The closed or slightly open small mouth – suggests seriousness and silence of the spirit.
Shining black colour – represents the mystery of the river-dwelling spirit.
Neck rings – health
The eyes should also be slightly oversized, indicating knowledge and wisdom and the mouth and nose smaller than life-size.

Amongst the Mende the female initiation society is known as the Sande, which corresponds to the male Poro initiation society, and is probably unique in Africa in having a masking tradition whereby a wooden mask is worn and the whole of the body is hidden.

The costume is worn by the elder women of the Sande society, and on the one hand is the embodiment of the ancestor of the owner of the mask and on the other is also linked to the water spirits of the bush. With their knowledge of medicine and healing, the sowei (mask and wearer are one) are well respected and have an extremely important role to play in the life of the village. They represent all of the women in their group and act on their behalf in cases of wrongdoing against their members. They also perform many dances and sing according to the requirements of major social and ceremonial events including performing in front of the chief of the village and visiting dignitaries.

All women belong to the Sande society into which they are initiated at about the age of 15. At puberty the girls leave home and live for several months and sometimes for over a year, in a hidden enclosed, area of the forest near the village where they receive training in practical skills and also instruction in problem solving and moral principles. The practical skills which they had begun to learn as children now take on an adult aspect as they learn farming, spinning, child-care, diagnosing of illness and the making and administering of medicine together with singing and dancing. The girls enter the forest as children and return to their village strong and capable of marrying. This segregation of women at a critical time in their lives is empowering and gives them a sense of solidarity with other women which is maintained throughout their lives through the Sande society.