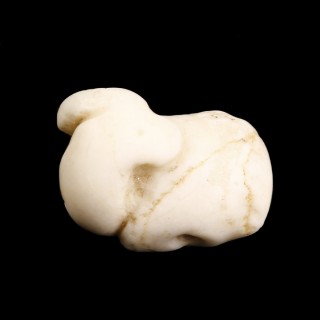 A very fine Mesopotamian marble seal amulet carved in the shape of a reclining animal, most likely an antelope or bull. The object is carved in high relief on one side to form a stylized sloping neck and head of an animal with a rounded snout and horns pointing backwards from the head. The head is shown turned in profile as though resting against the animal’s side. The body is depicted as a rounded, oblong shape, without visible legs, as though they are tucked beneath the animal’s torso. The reverse is flat, with a number of circular and linear incisions that would have formed the seal. The object is pierced transversely for suspension.