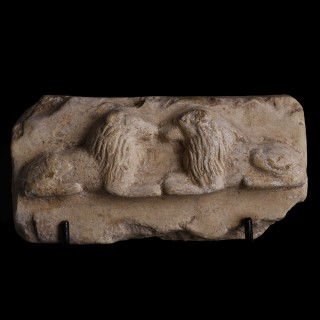 An extremely fine Mesopotamian sand-coloured stone plaque, carved in high relief with the depiction of two lions, shown facing each other. The lions are rendered in an extremely naturalist manner suggesting a dating to the New Assyrian and New Babylonian periods, circa late 1st millennium BC and 6th century BC. The plaque displays a flat, unworked reverse implying that it might have been attached to a wall, being part of wider narrative.

In Ancient Mesopotamian cultures, lions held important symbolic and religious meanings, and depiction of them have been recovered engraved in walls and modelled in round. In Sumerian religion, the goddess of love and war Ishtar was usually depicted on the back of two lionesses. Her Babylonian counterpart, Ishtar was also portrayed conducting a chariot drawn by seven lions. Lions were also associated with royalty, attested in numerous lion metaphors applied to the king in both Sumerian and Akkadian texts as well as in artistic evidence.

Condition: Extremely fine, with the carved detailing of the animals’ features clearly visible. Mounted on a custom-made stand ideal for display.