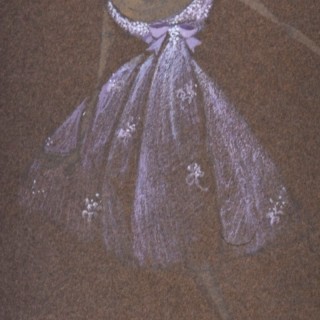 Cynthia Jeanette Tingey trained at the Regent Street Polytechnic where she won a medal for theatre design. She began working in the theatre in 1952. Her career included a five-year period as house designer for the theatrical costumiers, Bermans, as well as work on West End productions, department store exhibitions, and designs for over fifty films, but it was as a costume designer for pantomime, variety and cabaret that she became best known. She designed 15 of the London Palladium’s annual Christmas pantomimes, providing costumes for well-known artistes such as Arthur Askey, Cilla Black, Cliff Richard and Tommy Steele. Throughout the 1950s, ’60s and ’70s she was responsible for the costumes for cabarets at many of the major London nightclubs and hotels, and she also designed summer variety shows, ranging from the London Palladium’s extravaganzas to seaside specials at Blackpool and Great Yarmouth. A number of her designs are held in the collection of the Victoria & Albert Museum, London.