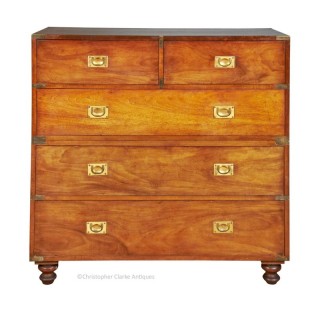 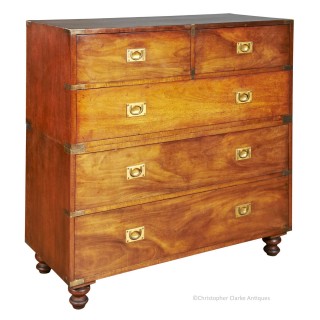 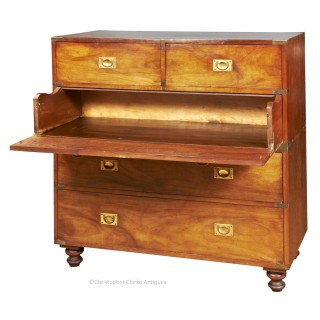 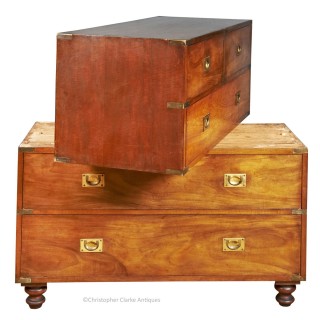 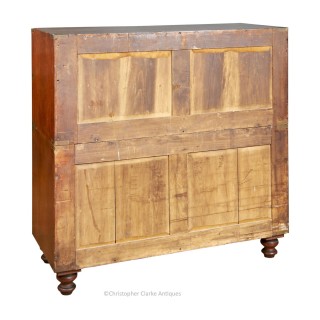 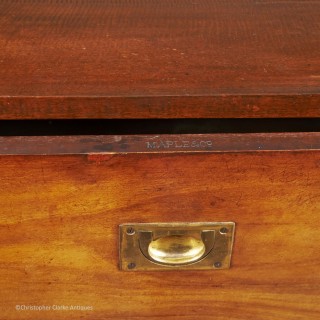 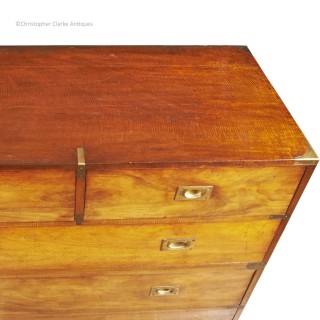 This chest is an interesting curiosity as it breaks some of the principles that had been established for making portable chests. The chest is veneered to the top and sides with fiddleback mahogany. It has also been used on the end grain of the drawer dividers. The drawer fronts are plain mahogany. Although this is very pleasing to the eye, it is unusual to find an English military chest of this period that is veneered. It wasn’t practical in a hot, wet climate such as India. The exception is walnut chests that are typically made of solid wood to the top and sides with figured veneers to the drawer fronts.

It was standard by the date this chest was made to have screw on feet, which were more practical. The feet on this chest have been replaced but it is obvious from the original blocks that it was always intended to have push on feet fitted with lugs. This was a practice that ended in the early to mid 19th century in Britain.

Another unusual feature is the drop down front to the top long drawer. This is something we have seen on occasion. It was never intended to be used as a desk but simply to give easy access to the contents. Added to this, the chest is also 7 inches wider than most of the period, with 39 inches being a standard size.

Perhaps these unusual features can be explained by the fact that the retailer, Maple & Co. were, as they advertised, the ‘largest’ and ‘most convenient’ furnishing store in the world. Maple sold many of the standard items of camp furniture that other London makers sold but it was a small part of their business. The domestic market was their main concern. They both bought in furniture from other workshops and manufactured their own. They were also known as importers of woods from Asia, Africa and America and were considered large timber merchants. Perhaps this chest was a commission made in Maple’s own workshops and their ready supply of a wide range of woods led them to use fiddleback mahogany veneers.

The business name changed to Maple & Co. in 1870 when John Maple’s sons Blundell and Harry joined. In 1891, following John’s retirement three years earlier, they became a limited company. As Maple & Co. is stamped to the top righthand drawer, if we assume they marked their furniture Maple & Co. Ltd with their change in status we have a twenty one year period in which it was made. The use of fiddleback mahogany veneers add a subtle decoration to this chest. Circa 1890.