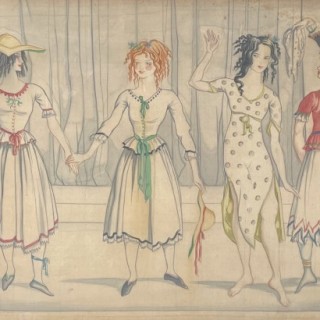 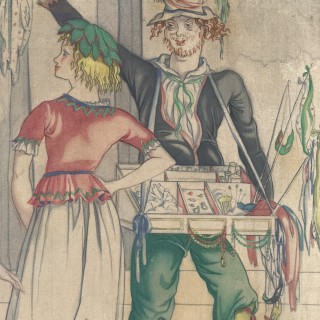 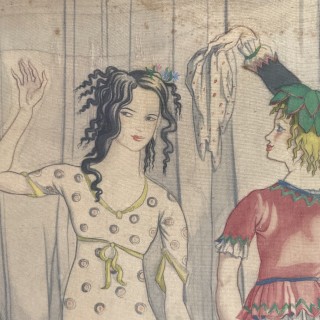 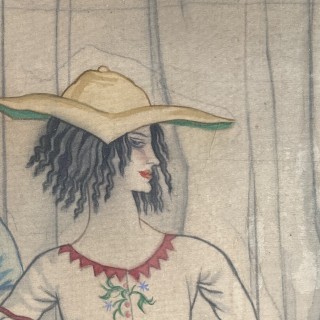 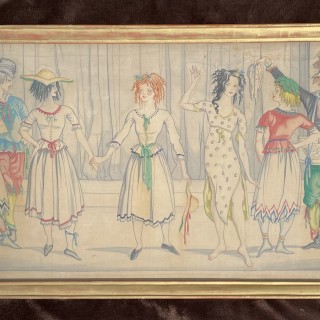 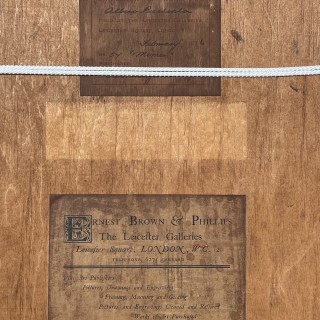 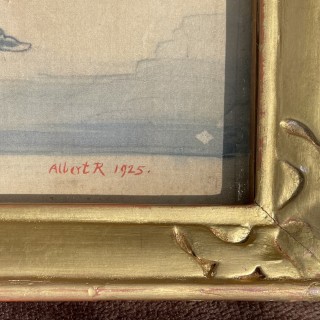 Provenance:
Purchased from the Leicester Gallery Exhibition of 1926 by Asa Lingard of Bradford.

Influenced by the work of his friend Charles Conder, Rutherston first started painting watercolours on silk 1910, holding a highly successful exhibition of them at the Carfax Gallery. He continued to paint these decorative silk watercolours for the following 25 years. They were often in fan shapes and sometimes set into furniture. In 1912 he was asked to design the costumes for Lillah MacCarthy and Harley Granville-Barker’s production of Shakespeare’s The Winter’s Tale. It was performed at the Savoy Theatre with sets designed by Norman Wilkinson of Four Oaks. Rutherston’s richly imaginative costumes were praised by the production only ran for six weeks. Although the present work is dated 1925 the right-hand figure on the current work shows the figure of Autolycus as used in the 1912 playbill for The Winter’s Tale. It was exhibited in Rutherston’s solo exhibition at the Leicester Galleries, London in 1926 when it was purchased by the Bardford art collector, Asa Lingard.

Born Albert Daniel Rothenstein, he was the youngest of the six children of Moritz and Bertha Rothenstein, German-Jewish immigrants who had settled in Bradford, Yorkshire in the 1860s. He and his siblings proved to be a hugely talented and artistic family, his elder brother became Sir William Rotherstein (1872-1945), the artist and director of the Royal College of Art; two of his other siblings, Charles Rutherston and Emily Hesslein, both accumulated major modern British and French art collections and his nephew Sir John Rothenstein was direct of the Tate Gallery.

He was educated at Bradford Grammar School before moving to London in 1898 to study at the Slade School of Art where he became close friends with Augustus John and William Orpen. He met Walter Sickert during a painting holiday in France in 1900 and by introducing Sickert to Spencer Gove became instrumental in the beginning of the Camden Town Group. He was one of Sickert’s most frequent companions and was one of the original members of the Fitzroy Street Group. Rutherston had a sociable and attractive personality, he frequently travelled abroad with other artists including Max Beerbohm, Spencer Gore, Walter Russell and Edna Clarke Hall. It was Clarke Hall who introduced him to watercolour painting and in 1910, while in Grasse on the France Riviera.

At the outbreak of World War I he was initially assigned a desk job with the Engineers’ War Service Register at the Board of Trade and from October 1916 he served with the Northamptonshire Regiment in Egypt and Palestine. At this time he anglicised his surname as a declaration of patriotism to the country of his birth. Following the war he returned to his artistic career and married the actress, Marjory Holman. He took a number of teaching posts, starting at Camberwell School of Art and later becoming Ruskin Master of Drawing in 1929. At the same time his own work flourished when he was recruited as an illustrator by the Curwen Press along with Claud Lovat Fraser and Paul Nash. In 1938 he largely returned to oil painting.

Rutherston became a member of the New English Art Club in 1905, a member of the Royal Society of Painters in Watercolours in 1942 and was also a regular exhibitor at the Cheltenham Group. Examples of his work are in the collections of the Tate Gallery, Victoria & Albert Museum Ashmolean Museum, Bradford Art Gallery Manchester City Art Gallery and elsewhere.