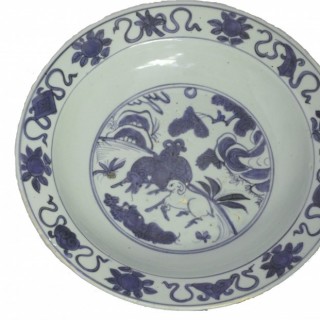 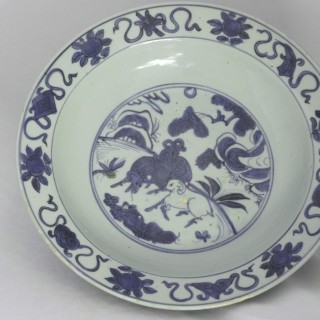 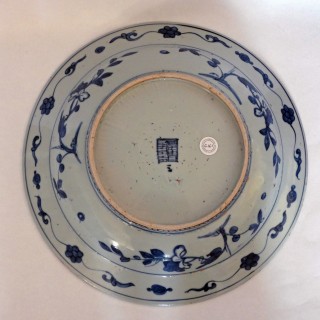 Ming c1500 Late Hongzhi / early Zhengde blue and white deep dish with an everted rim, made at Jingdezhen in Jiangxi province.
The centre is painted with three goats, rams or ewes, in a naturalistic setting with hollow rocks, flowering plants and a rising sun The Chinese don’t differentiate between goats and sheep and the collective noun for these animals is a homophone of Yang the male principle of positive force.
Three goats/sheep represents a wish for a change of fortune in the New Year and with a rising sun means prosperity in the spring time.
The cavetto is painted with alternating flower heads and scholars items the underside is painted
with birds in flowering branches
The Emperor Xuande (1426-1435) in his fourth year painted a picture with a ewe and two lambs under a rock, after that the motif of three rams / goats appeared in early Ming decorative arts but didn’t find prominence until the Later Qing Emperor Qianlong who loved a play on words.