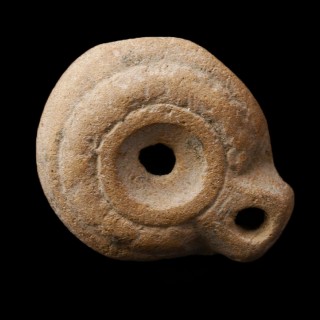 A miniature Ancient Roman terracotta, mould-made, votive oil lamp featuring a rounded body, a short nozzle and one filling hole to the discuss.

Miniature lamps were used as votive offerings and placed in temples and shrines. Such miniature lamps have been recovered across all the Mediterranean area of the Roman Empire. In Ancient Roman religion and culture, light was believed to be a blessing, hence the presence of miniature-sized oil lamps in religious contexts. Miniature lamps were also buried with the dead, as ritual tools to light the way into the afterlife.