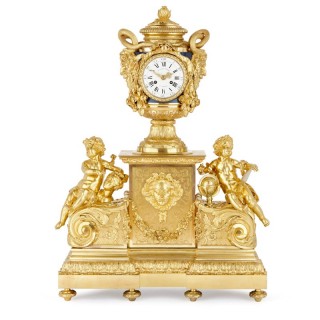 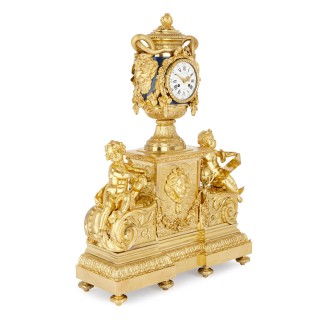 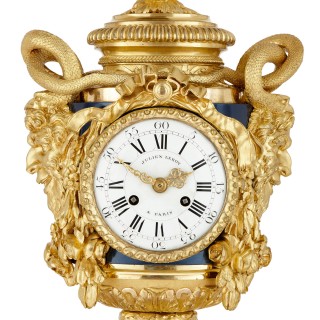 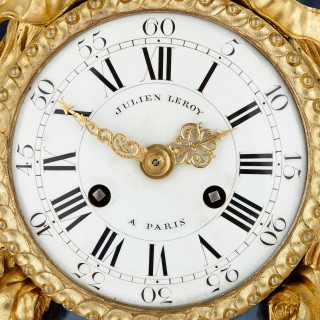 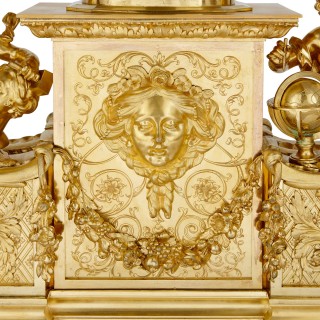 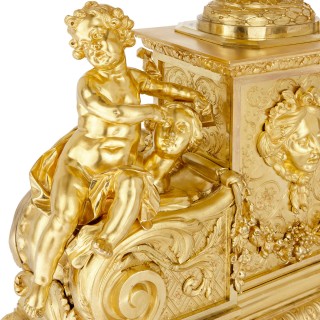 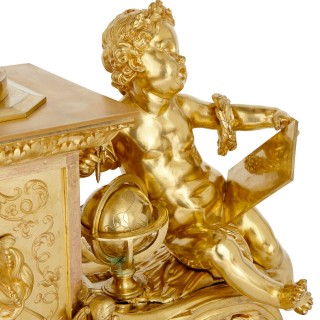 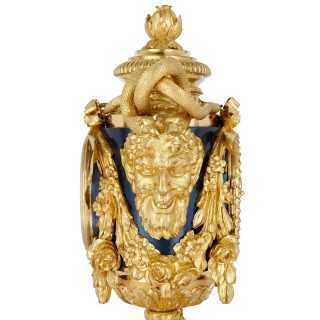 This exquisite gilt bronze (ormolu) clock is signed, ‘JULIEN LEROY/ A PARIS’. The piece was crafted in the 19th Century in the manner of Julien Le Roy. Described by his contemporaries as ‘the most skillful clockmaker in France, possibly in Europe’, Julien Le Roy was the leading clock and watchmaker of the 18th Century. He was the appointed clockmaker (Horologer Ordinaire du Roi) to King Louis XV, and directed a large workshop that produced timepieces for an elite international clientele. Le Roy’s 18th Century clocks are now held in major collections across the world, including the Musée du Louvre and Château de Versailles in France, the Victoria and Albert Museum in England, and the Rijksmuseum in Amsterdam.

The mantel clock is composed of a circular, white enamel dial, featuring Roman Numerals and Arabic Numbers, set within a vase-form case. Crafted from deep blue painted tole (metal), the vase case is mounted with gilt bronze satyr heads, flower swags, swan handles, and a lid, topped by a foliate finial. The vase stands on the gilt bronze clock body, which consists of a tall, rectangular plinth, flanked by two scrolled brackets. A classical female mask and foliage swags are mounted onto the plinth, and the scrolls are topped by two putti. One putto is depicted carving a classical head from stone, and the other holds a writing tablet and stylus, which he points to a globe with. These putti likely represent the Arts and Sciences. The clock stands on a rectangular base, with a staggered front, which is set on eight toupie feet.