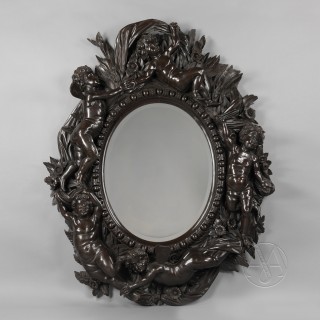 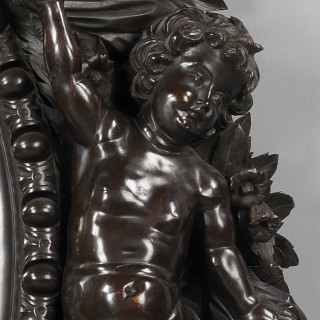 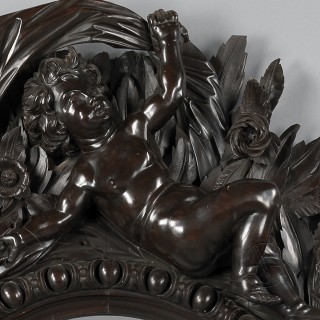 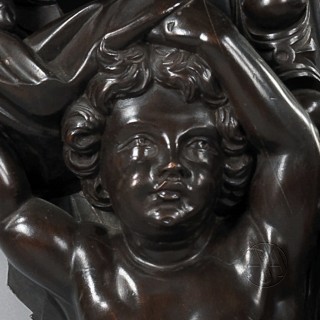 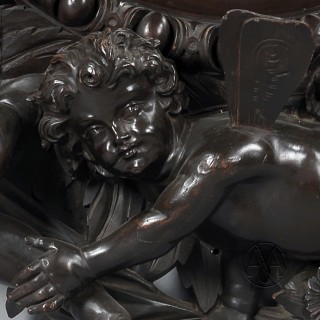 The oval bevelled mirror-plate within an egg and dart frame, the outer-border carved with foliage, flowers and five playful putti. A comparable mirror was exhibited at the 1876 Philadelphia Centennial Exhibition and the 1881 Esposizione Italiana di Milano.

Valentino Panciera Besarel (1829 – 1902), born in Zoldo, established himself in the 1860’s in Venice where he opened his atelier and shop. He soon established himself as a creator of exquisite sculpture and furniture for wealthy private patrons and the royal courts. The strong sculptural theme of his furniture was directly influenced by the work of the seventeenth century master Andrea Brustolon (1662 – 1732) whose work he had been frequently exposed to in Venice.

Andrea Brustolon (b. 1662 – d. 1732) was a Venetian sculptor and carver known for his exuberant Baroque style furniture and devotional sculptures. He trained in the local tradition at Belluno in the Venetian terraferma and in the studio of the Genoese sculptor Filippo Parodi who carried out commissions at Padua and Venice. His high Baroque style was undoubtedly influenced by two years spent in Rome from 1678 – 1680 where he was exposed to the sculpture of Bernini and his contemporaries.

The first phase of his working career was spent in Venice, 1680-1685. His furniture including armchairs with figural sculptures that take the place of front legs and armrest supports were inspired by his experience of Bernini’s Cathedra Petri.