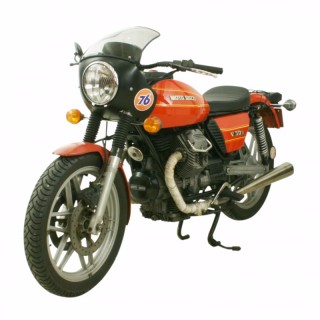 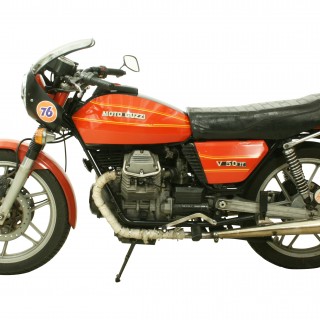 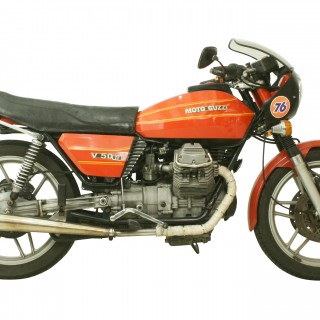 Motorcyclist and only those who appreciate machines that are red, Italian and make all the right noises will be excited by the V50-II.
Following past Guzzi tradition the V50 has a 90° V-Twin engine driving a separate transmission through a dry clutch and from the transmission the power is delivered via a shaft to the rear hub. And while the size and general configuration is similar to a Honda CX500, the small Guzzi is as much like a Honda as it is like a Harley, that is, not at all. It is, instead, every millimetre a Guzzi.

This is a wonderful air cooled, four stroke, V twin engine longitudinally mounted with OHV, 2 per cylinder. The handling qualities of this machine are superb with a supposed top speed of 103 mp/h. The front suspension has Telehydraulic gas forks and the rear with swinging arm fork with hydraulic gas shock absorbers. The previous owner has made some alterations to suit his own style, like a single seat, ( now replaced with the original ), fairing and one or two other little bits. Both wheels are 18 inch cast aluminium alloy. The V50 has electronic ignition. As much a part of Guzzi design as the engine are the brakes. Triple discs, with the rear disc and one of the front discs linked and activated by the brake pedal, the other front disc is operated by the hand lever. The V50’s brakes work far better than you can imagine they would. At any speed a light tap on the brake pedal brings moderate stops with no problem. The more a rider gets accustomed to stomping on the pedal, the harder he steps, until he has the V50 lurching to a stop with nothing but the pedal. Pushed really hard the rear brake will lock up before the front if only the pedal is used. But the braking force available with just the brake pedal is about equal to all the braking force of an average motorcycle. Only on the Guzzi there’s another disc up front adding to the ultimate braking power.

The Moto Guzzi V50 II has somehow managed that perfect blend between styling and function.