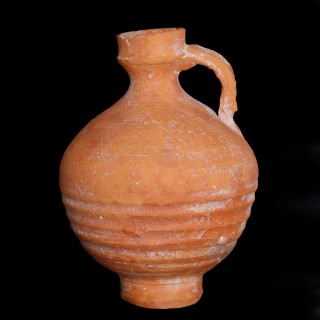 A finely potted Nabataean bright red terracotta vessel, comprising a globular, striate body leading to a short neck and mouth. A single applied handle extends from the vessel’s body to the neck. The whole bottle rests on a small ring base and displays a beautiful matte finishing with some traces of white inclusions. The vessel, in its simplicity and crudeness, can be dated around 150 AD, to the time of Roman conquest.

Nabatean, or Nabataean, pottery and coroplastic production, recovered since the very first organized archaeological excavations of Petra in Jordan, attest the great skills of Nabatean craftsmen. Since the 1stcentury BC, the Nabateans developed a specific and characteristic style in their pottery production, without any reference to the Hellenistic artistic tradition. Nabatean pottery is characterised by a bright red terracotta, a fine modelling and by a painted decoration, and displays a smooth and matte finishing. Many different shapes have been recovered, including huge jars, pots, flacons for storage of perfumes and ointments, and bowls, usually the most painted forms. One of the most interesting and most recognisable aspects of Nabatean terracotta wares is the thinness of the vessels’ walls, known as egg-shell vessels. Such vessels, featuring a thickness of 1-3 mm and a metallic hardness, were mostly shallow open bowls, extremely difficult to be potted on the potter’s wheel. With the Roman conquest of the area around 150 AD, Nabatean pottery production started losing its thinness and polychrome decoration, becoming more crude and simple.

Condition: Extremely fine, complete and intact. The piece has been mounted on a custom-made stand, ideal for display.