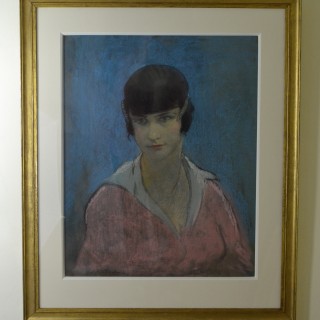 Signed; signed, inscribed with title and the artist’s address on a label on the backboard
Pastel

Provenance:
From the collection of Lord Lee of Trafford, Bowdon Old Hall, Cheshire.

Of Armenian descent, Chahine was born in Vienna where his father’s business dealings were associated with the Ottoman Bank, however, during much of his youth his family were based in Constantinople. In 1892 he left school early in order to travel to Italy and study art in Venice before moving to Paris in 1895. Here he was joined by his mother, his father remaining in Constantinople. In Paris he enrolled at the Academie Julian and in 1899 he started exhibiting paintings and etchings at the Salon held by the Society of French Artists. In 1900 his prints earned him a gold medal at the Universal Exhibition in Paris and in 1903 he won another gold medal at the Venice Biennale. Chahine’s subjects were often drawn from the society, streets and theatres of Paris, from the poor and dispossessed and from Armenian themes. He was a founding member of Ani, the Union of French-Armenian Artists in Paris, who held their first exhibition in October 1927. He became a naturalized French citizen in 1924 and was awarded the Legion d’honneur in 1932. His reputation was based on his work as a printmaker, a medium of which he was a supreme master, although he was also a fine painter and pastellist. A large amount of his work, mostly prints, was destroyed in a studio fire in 1926 and he suffered another loss in a flood in 1942, his work is therefore rare. Some of his remaining pastel works can be found in the collection of the Musee Armenian de France in Paris, Musee d’Orsay and the Krannert Art Museum, Illinois.

The present work was one of a group of eight pastels by Chahine exhibited at the Venice Biennale of 1922.

Another drawing by Chahine, of the same model, appears as an illustration in the article “Paris qui Passe..” by Francis Carco, published in L’Illustration, Journal Hebdomadaire Universel, no. 4735, 2 Dec 1922. (Reprinted in Contes et Nouvelles (L’Illustration, Paris, pp.4 (no date).

We are grateful to Prof. Charles Sorrell, who is currently preparing a catalogue raisonné of Chahine’s prints, for his kind help in cataloguing this picture.