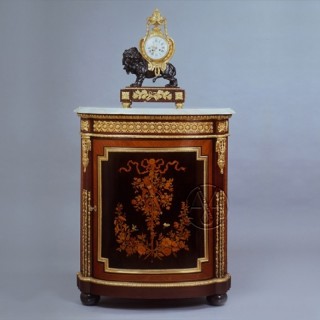 The Gilt-Bronze mounts stamped on the back ‘HPR’ for Henri Picard.

The cabinet has shaped Algerian onyx marble top above a gilt-bronze guilloche and flower head frieze. The curved front has gilt-bronze mounted uprights flanking an ebonised door, finely inlayed with fruitwood marquetry depicting a ribbon tied trophy and flowers with hovering butterflies, all within a gilt-bronze frame. The cabinet is raised on a shaped plinth base with flattened bun feet.

The overall design of the cabinet with its wonderful marquetry inlay on an ebonised background is reminiscent of the designs of the 17th century court cabinetmaker Andre Charles Boulle. André-Charles Boulle (1642-1732) was arguably the greatest ever French cabinetmaker. The son of a maitre-menuisier en ébène, Jean Bolt, Boulle was already a master by 1666, and in 1672 was appointed Ébéniste, Ciseleur, Doreur et Sculpteur du Roi (cabinet maker to the King), allowing him to establish workshops in the Louvre. By the time that he died in 1732, Boulle had helped to raise the prestige of the cabinet maker to a level equal to that of the painter, and the aristocratic quality of his work had made him both celebrated and emulated throughout Europe.