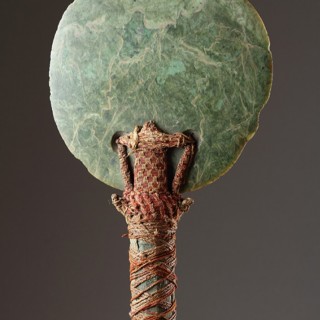 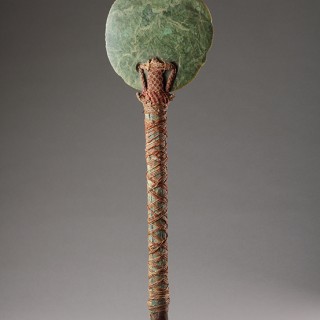 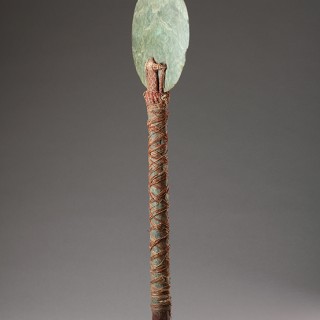 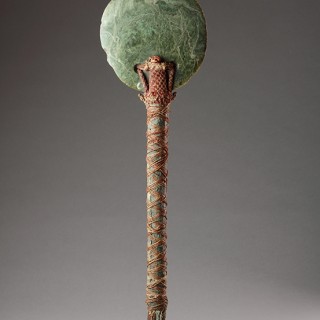 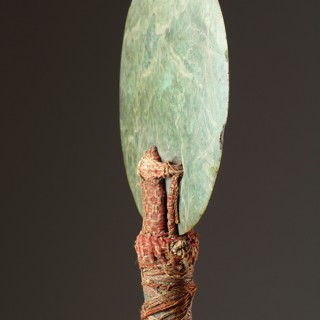 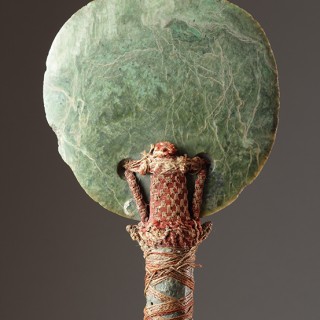 Symbolising the strength and power of the chief and his clan, these ceremonial sceptres have beautiful circular blades made from a light green serpentine, sometimes erroneously called jade, that are sanded flat to a special thinness. The blade is therefore quite fragile and is not capable of serving any practical purpose, although they are sometimes used as prestigious objects of ritual exchange. The serpentine was quarried from important deposits on Ouen Island near Nouméa. From there it would start out on a long cycle of barter that would take it north up the coast eventually reaching the Loyalty Islands. The symbolism embodied by these ‘clubs’, described in 1794 by Bruni d’Entrecasteaux’s ships crew as ‘axe-monstrances’, is said to be linked to ritual prayers for sun and rain. The blade can be so thin that when held up to the sunlight it is encircled by a golden-green tinged halo.
The stone blades are hafted to wooden shafts that are wrapped in tapa bark cloth held in place by a highly ornamental webbing design in cord teased out from flying fox fur. Such strands are also status symbols as red dyed cords are also used in ritualised exchange. The strips of tapa and the red flying fox fur were later ousted by imported colonial trade cloth.