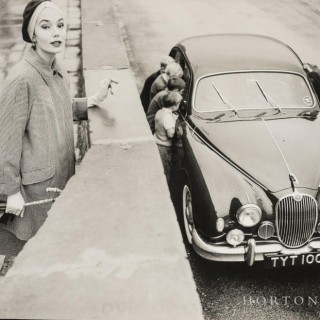 Angela Williams Archive. Williams worked as an assistant to Parkinson in the early 1960’s and was given a number of vintage prints after helping the photographer clear out his Twickenham studio when he moved to Tobago in 1963. The archive has been painstakingly researched by Williams who has identified models and locations, a number were exhibited at the Julia Margaret Cameron Museum in the Isle of Wight in 2011.

This photograph swows the model Ann Gunning wearing an Aquascutum coat and a hat by Delores Boutique.

The car was Parkinson’s own Jaguar 3.4 (reg TYT 100) which he used as a prop on several shoots.