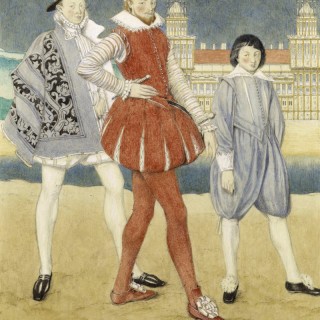 Norman Wilkinson was an artist, illustrator and theatre designer of stage and costumes. The son of a Birmingham draper, he was educated at Abbotsholme School and studied at Birmingham School of Art 1900-03 under Edward R Taylor, Arthur Gaskin and Henry Payne. At this time he shared a studio with Maxwell Armfield. In 1902 he and Armfield moved to Paris where they were later joined by Keith Henderson in their studio in the rue de la Grande Chaumiére.

His work as an illustrator includes Chaucer’s The Romaunt of the Rose for Henry Holt & Company in 1911, in which he collaborated with Keith Henderson and Robert Louis Stevenson’s Virginibus Puerisque and Other Papers, Chatto and Windus, 1921.

As a stage designer he first worked for Charles Frohman at the Duke of York’s Theatre in 1910, but came into prominence with his designs for Granville-Barker’s seasons at the Savoy, his permanent set for Twelfth Night in 1912 being much admired. Particularly memorable were his designs for A Midsummer Night’s Dream in 1914, with its gilded fairies and iridescent forest. He was later with Nigel Playfair at the Lyric Theatre, Hammersmith, worked for C. B. Cochran and for the Phoenix Societies and Stage Societies. Wilkinson is considered as one of the greatest Shakespearean designers of the first half of the 20th century. He became a governor of the Shakespeare Memorial Theatre, where in 1932 he designed A Midsummer Night’s Dream and in 1933 Romeo and Juliet. An exhibition of his original stage and costume designs was held at the National Gallery of Canada in 1936.

He adopted the suffix “of Four Oaks” to distinguish himself from a contemporary marine artist of the same name. A portrait of Wilkinson by Maxwell Armfield (1904, private collection) was exhibited at the Fine Art Society in 1970. In private, Wilkinson was a desperate alcoholic, shattered by the First World War, he died while designing The Tempest in 1934.

The present work illustrates the beginning of Act III in Romeo and Juliet. Mercutio, a friend of Romeo’s enters accompanied by their mutual friend Benvolio and their servants. He understands that Romeo and Tybalt may be about to engage in a duel and he has decided stand in for Romeo and fight Tybalt himself. Although Romeo attempts to stop the duel Mercutio is fatally stabbed, managing to curse both the Montagues and Capulets before he dies: “A plague on both your houses”. Romeo turns on Tybalt and kills him in revenge thus beginning the tragic turn of events.