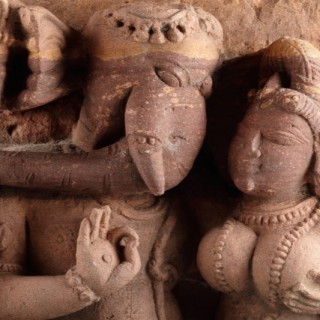 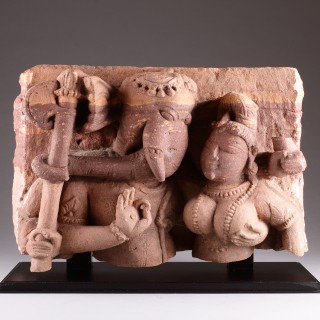 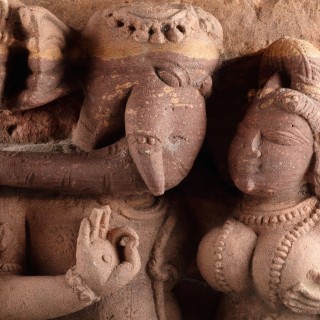 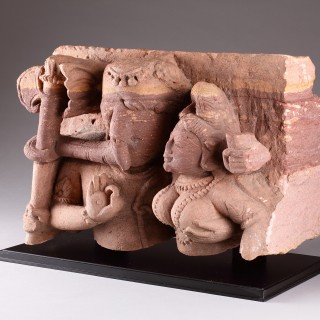 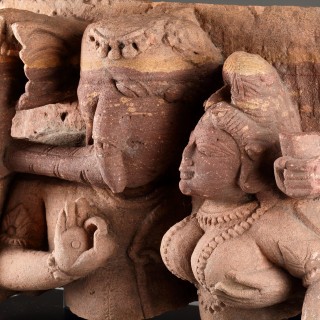 The elephant-headed Ganesha, a son of Shiva is a beloved divinity in India who is worshipped with much enthusiasm and great festivals are organised in his honour. He is regarded as a destroyer of obstacles, a dispenser of wealth and wisdom and a bestower of success. He also has a reputation for being wily and acting only after thought, and if angered or ignored, he is no longer a remover, but a creator of obstacles. On entering a temple a worshipper will acknowledge Ganesha before any other God. His shrine will be located in the entrance and before homage is paid to the main deity Ganesha must be satisfied.
Ganesha was born from Parvati and was created from the mixture of unguents and dirt she rubbed from her legs as she washed in the river. By her own energy she empowered the small model of the male figure she had made and brought it to life as her son Ganesha. At the time of his birth Shiva was away from home and on returning he found an unknown young man standing guard outside the bathroom of his wife Parvati. He challenged him and Ganesha, equally unknowing of his father, challenged him to a fight. The result was never in doubt for Shiva is the greatest of the Gods and the father killed his own son by cutting off his human head. When Parvati found out what had happened and explained the circumstances to Shiva the god undertook to restore Ganesha to life. He immediately ordered one of his servants to bring him the head of the first being he met. This was an elephant and so Ganesha was returned to life with an elephant’s head.
In recognition of his courage in the defence of his mother’s chamber Ganesha was given custody over all doorways, and this can be seen in thousands of examples throughout India where an image of the corpulent divinity is placed in a lintel above an entrance.