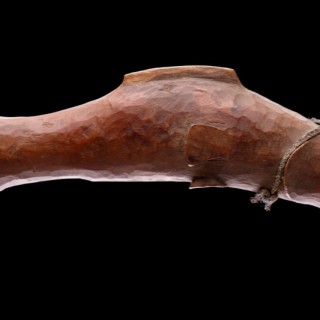 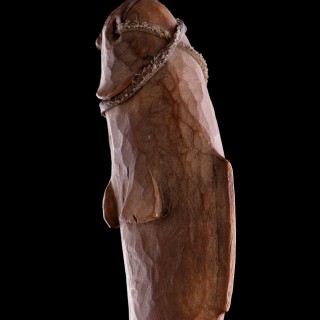 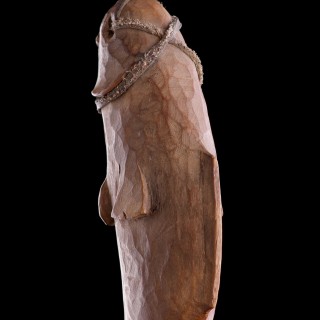 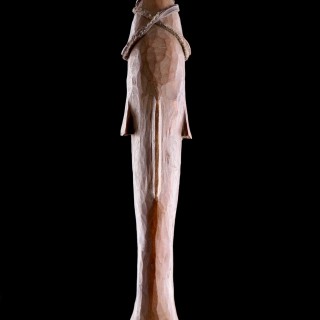 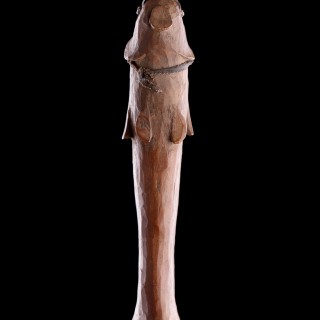 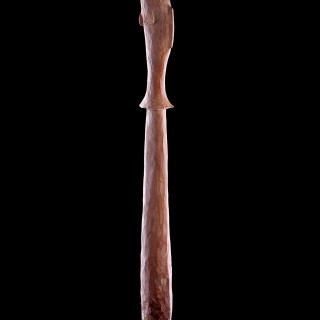 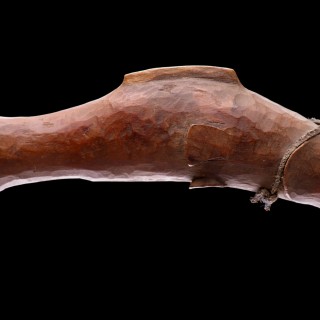 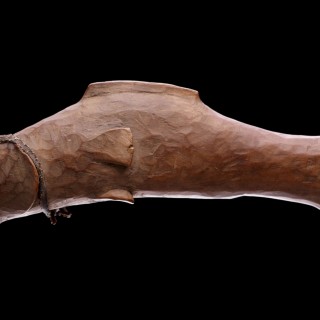 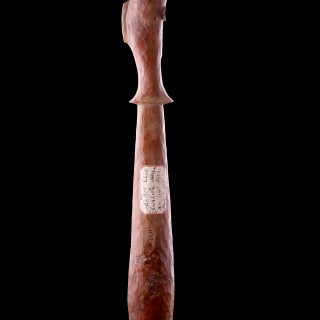 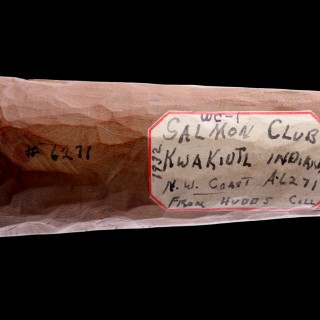 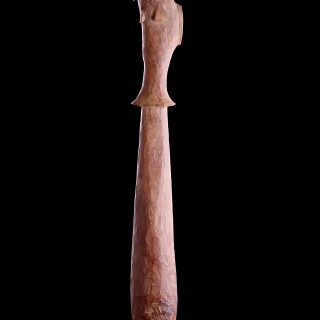 A Northwest Coast British Columbian Kwakiutl Cedar-Wood Club Finely Carved in the Form of a Leaping Salmon
An old label to the blade inscribed ‘Salmon Club Kwakiutl Indians N.W. Coast. A.6271 from Hubbs Coll.1932’
With an ink accession No ‘6271’
19th Century

Ex collection William Hubbs Mechling, Anthropologist (1888 – 1953) He Studied the Peoples of N.W. Coast. Some of his essays are amongst the Meinhard Papers in the Manuscript Collections of the Pitt Rivers Museum Oxford
Ex Private American collection

The kwakiutl, now known as the ‘Kwakwaka’wakw’ are a scattered group of tribes speaking related dialects and possessing certain cultural similarities that distinguish them from other peoples of the North West coast. The word ‘Kwakiutl’ means ‘beach on the other side of the river’ and strictly only applied to one of the four tribes from northeastern Vancouver Island who came together in a loose confederation in 1849. They regard their territory as their primeval home and trace their origins through the ‘Numayms’ or lineages to mythical ancestors who, as Frank Boas of the American Museum of Natural History put it ‘appeared in a specific locality by coming down from the sky, out of the sea, or from underground, generally in the form of an animal, took off his animal mask and became a person’.
Frank Boas wrote to his wife in November 1894 from Fort Rupert where he ate a remarkable feast with the Kwakiutl… ‘the salmon were all cooked and placed on platters like those one can see in museums. Olachen, (a very greasy fish) oil was poured over them and we started eating. You should have seen me eating with a wood spoon and four Indians from a platter, with blanket over my shoulders – I don’t want to make a mess of my coat at these festivals and without something it is usually too cold… During the whole feast a colossal fire was maintained so that the roof started to burn several times and someone went up to extinguish it. That is part of a large feast!’.