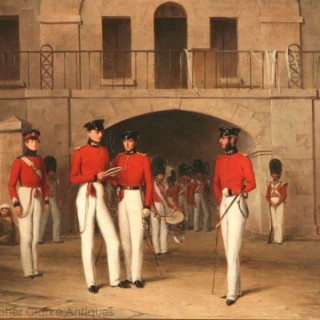 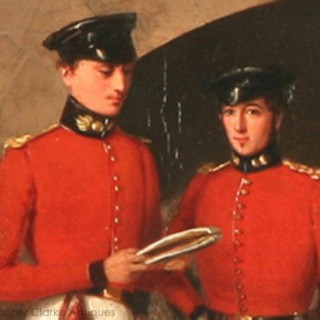 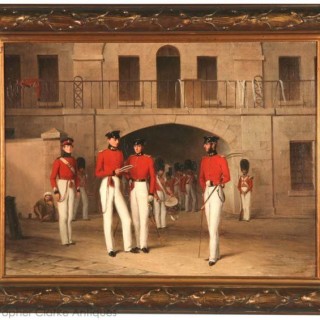 Officers of the 7th Royal Fusiliers

Painted in oils on canvas, this picture of officers of the 7th Royal Fusiliers stands out for both the fact that it is a triple portrait and for the location.

A paper label to the back gives the subjects as Captain Sir William O’Malley, Hon. Ivor Talbot and Sir William Kir. It was probably written by a relative at a later date and it would seem an error was made with the name Kir, which does not exist in the Army Lists of this period. The third subject might be either Lieutenant Richard Maunsell or Captain Lacy Walter Yea, both contemporaries of the other two. Given the dates of the subjects, movement of the regiment and scenery, the location is barracks on Grand Casemates Square, Gibraltar. It is likely that what is represented is the Ceremony of the Keys.

The painting is unsigned and the artist unknown but the style is similar to that of Daniel Cunliffe (1800-1871) who painted similar elongated figures and whose dates match. A striking painting that still has part of its story to tell. Circa 1844.

Officers of the 7th Royal Fusiliers