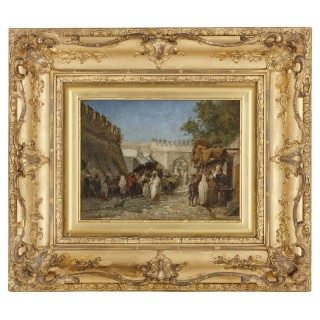 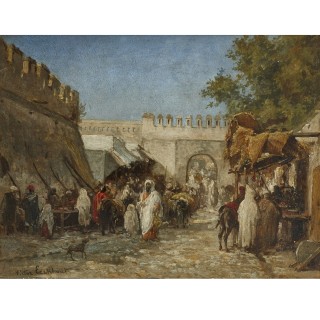 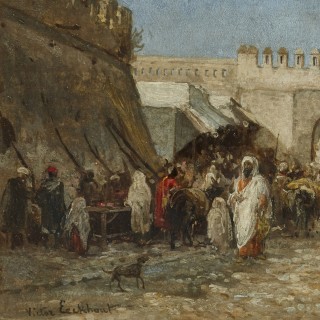 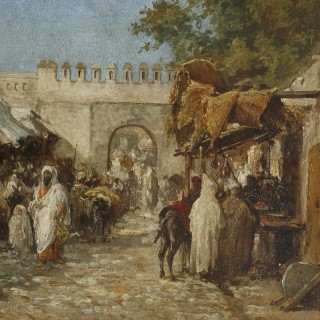 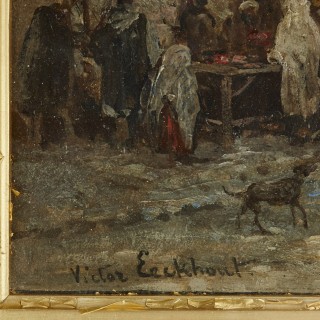 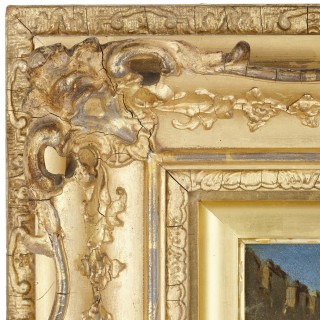 Oil on panel painting of market in giltwood frame by Eeckhout

This beautiful painting was created by the accomplished artist, Victor Eeckhout (Begian, 1821-1879). Eeckhout was taught the art of painting by his father, Jacob Joseph Eeckhout, the director of the Royal Academy of Art in The Hague. Victor specialised in the creation of Orientalist paintings which were often based on his experiences of travelling in North Africa, chiefly Morocco. ‘Victor Eeckhout’ is signed in the lower left corner of the panel.

The painting depicts a bazaar (marketplace) which takes place on a cobbled street, lined with crenelated stone buildings. Market stalls have been set up on either side of the street and are visited by crowds of figures in loosely draped clothes. Some of the market-goers are accompanied by donkeys carrying bags full of goods. In the centre left of the scene, there is a man who walks towards the viewer, in the opposite direction of the crowd. A small dog stands before him on the street. The market is bathed in a warm, golden light.

This scene has been rendered using short, visible strokes of colour. The marks are sketchy and expressive, most likely done quickly to capture the buzz and activity of the marketplace. It has been executed with great skill and beauty. The panel is displayed in a giltwood frame which is carved with cartouches, scrollwork and stylised foliate motifs.

Oil on panel painting of market in giltwood frame by Eeckhout