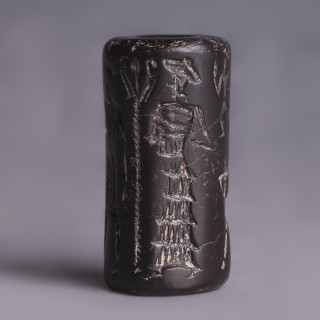 A finely engraved Old Babylonian hematite cylinder seal, with fully-arranged religious motifs. The seal displays a short-skirted, round-copped warrior king facing another round-capped male figure who is wearing a full-length skirt and is raising his left hand. The warrior king is carrying a mace in front of his chest and is followed by a male deity who is wearing a long, iconic flounced garment. A long sceptre, with a swirled staff and two protuberances that terminate into feline heads, is depicted in between them. A bow-legged dwarf, an abstract standing bull, a double-forked lightning bolt, a spear head and a crescent are placed amidst the figures. This seal has been horizontally perforated, suggesting it was once used to roll over the clay surface to impress administrative records and images.

The seal impression is for reference only.