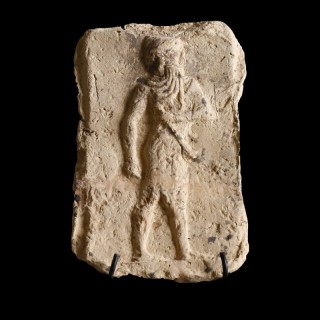 A finely moulded Isin-Larsa/ Old Babylonian light earthenware plaque, featuring the high relief depiction of a long-bearded male figure, portrayed standing, facing right and holding a mace or a sceptre with his right hand. Mace heads were believed symbols of rank and authority. The figure is shown wearing a headpiece and a short kilt. The solemn gesture and the round-ended headpiece might associate the figure to an Isin-Larsa/ Old Babylonian ruler, warrior or even to a deity. The plaque might have been used as a votive object, dedicated to deities worshipped in both Sumerian and Akkadian worlds. The back of the plaque appears unworked, suggesting that it might have been attached to a temple’s or shrine’s wall.

Terracotta plaques, such as this fine example, were extremely common in Ancient Mesopotamia, being excavated not only in temples but also in private homes, as part of domestic shrines. Decorative motifs included depictions of rulers, priests, zoomorphic creatures and deities. Bearded male figures holding maces and facing deities, appear engraved on cylinder seals of the same period. This specific plaque has been dated to the Isin-Larsa period (circa 2025-1763 BC), a short period in ancient Mesopotamia later integrated in the Old Babylonian Empire. As the last Sumerian ruling power in Mesopotamia, artistic production of the Isin-Larsa period had a great influence on Old Babylonia.

Condition: Fine, complete and intact. The artefact has been mounted on a custom made stand ideal for display.