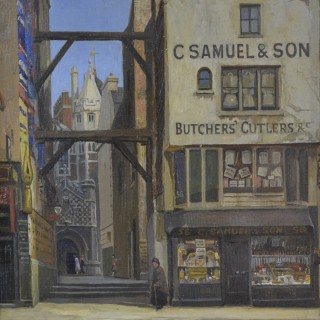 Signed l.r.; inscribed with title and the artist address on labels on the reverse
Oil on board

A lost shop which once housed a specialist knife shop which supplied the butchers of Smithfield Market which stands opposite. Long Lane’s old buildings on either side of Rising Sun Court are propped up for support giving a view of the Priory Church of St Bartholomew the Great.