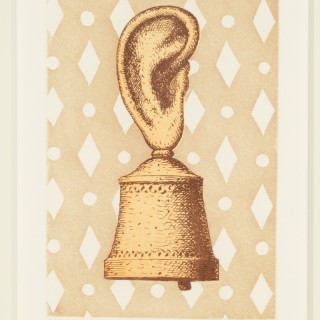 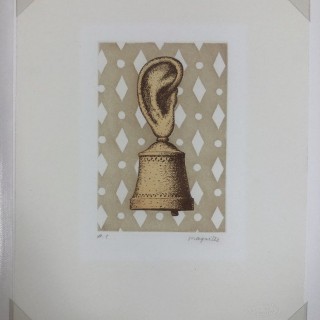 Title: L’Oreille Cloche
La Lecon de Musique
Medium: Original Etching and aquatint in colours, 1968, on BFK Rives paper, with artists signature stamp and stamp reading “Gravure Originale Atelier Rene Magritte” in oval, bottom right.
Edition: HC
The edition consisted also of
150 on Japon nacre paper
25 “hors commerce” examples numbered I/XXV/XXV/XXV on Rives paper
25 “hors commerce” examples numbered I/XXV/XXV/XXV on Japon Nacre paper
A small number of artist proof copies on Rives and Japon marked ea
Size: 103 x 152 mms (plate); 220 x 275 mms (Paper size)
Publisher: Atelier Georges Visat, Paris;
Printed by: Atelier Georges Visat, Paris
Note: This is plate III (of three) illustrating the volume “Signe de Survie au temps d’Amour” by Guy Rosie.
During 1968 and some months prior to his death in August of that year Magritte initiated a project with George Visat, Director and Master Printer of Atelier Georges Visat in Paris. Magritte presented Visat with a number of colour sketches which were proposed to be studies for colour engravings. Unfortunately the artist fell ill and died before these could be produced. After the artists death the publisher got together with his widow, Georgette Magritte, and they decided to complete the project. This item was part of the project and is correctly described as “after Magritte”. The work is properly described and catalogued in the Magritte Catalogue Raisonee by Kaplan & Baum.
The work was published only posthumously. The image is typical Magritte: two ordinary things represented realistically, but brought into unexpected conjunction and set against a geometrically patterned background. It is his own style of surrealism. As one might ask what it means, the artist would answer that it means nothing, that it is a mystery and that the mystery means nothing. And yet, like a bon mot, the images stick in the mind and reverberate differently in every person who sees them.

Provenance: The estate of Dr. Seymour Ira Schwartz, Rochester, New York. Seymour I. Schwartz, (January 22, 1928 – August 28, 2020) was the Distinguished Alumni Professor for the Department of Surgery at the University of Rochester in Rochester, New York . He was one of the most prolific and honoured surgeons in American history with further successes outside of the field of medicine as a renowned author and cartographic historian