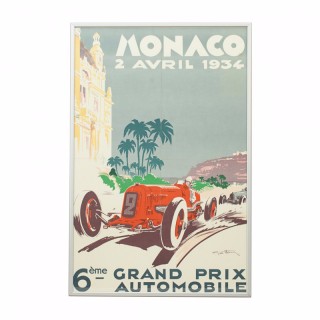 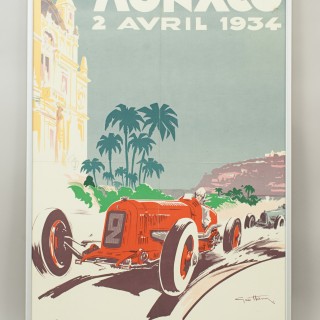 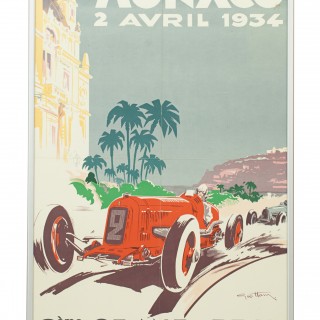 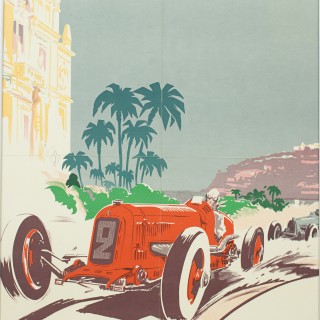 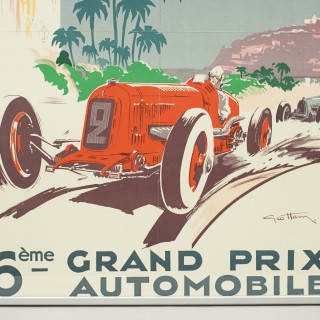 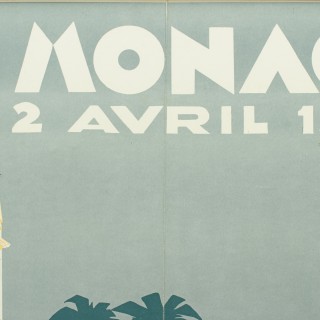 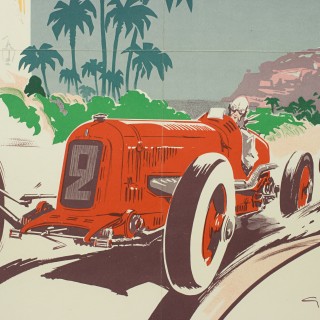 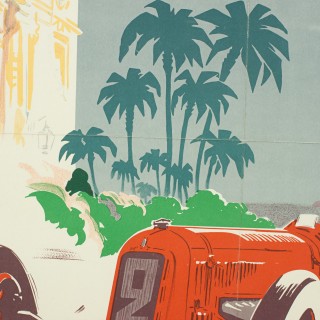 Original 1934 Monaco Poster after George Hamel.
A fine rare and large original Monaco Grand Prix poster from 1934. The colours of this poster are still very rich and the condition is excellent apart from a few slight stains and fold lines down the centers. The poster depicts a red No.2 car racing around casino square followed by a blue car. A printed signature of Geo Ham can be found on the poster. A rare poster indeed reading “MONACO, 2 Avril 1934, 6 ème GRAND PRIX AUTOMOBILE”
(MONACO, April 2, 1934, 6th AUTUMN GRAND PRIX).

Geo Ham (George Hamel, 1900 – 1972) was one of the finest automotive artists of all time and was well established by the 1930’s. He was commissioned to create the wonderful racing posters for the Monaco Grand Prix, the 24 Hours of Le Mans and many more. He was an automotive enthusiast and part time racing driver and managed to use this knowledge to capture the excitement and movement of motor racing within his pictures. Many of his original paintings are on display in the offices of the Automobile Club de l’Ouest.

The 1934 Monaco Grand Prix (formally the VI Grand Prix de Monaco) was a Grand Prix motor race held on 2 April 1934 at Circuit de Monaco in and out of Monte Carlo. The race comprised 100 laps of a 3.180 km circuit, for a total race distance of 318.0 km.
The Association Internationale des Automobile Clubs Reconnus (AIACR) had announced on 12 October 1932 that a new Grand Prix formula will go into effect for the 1934 season, and the 1934 Monaco Grand Prix was the first Grand Épreuve event run under the new regulations. Although one of the new rules required the race distance to be over 500 km, Monaco GP was permitted to be run for 100 laps or 318 km, as the time required to complete 100 laps at the slow Circuit de Monaco was comparable to 500 km at faster tracks such as Monza.
The race was won by Guy Moll, a newly recruited Algerian of Scuderia Ferrari, driving an Alfa Romeo Tipo B/P3. In addition to winning the very first race after the enrolment to the Ferrari team, Moll (at 23 years and 10 months old) remained the youngest driver to have won a Monaco GP until Lewis Hamilton (at 23 years and 4 months) won in 2008.
Taken from Wikipedia.

Fold creases and a little staining.