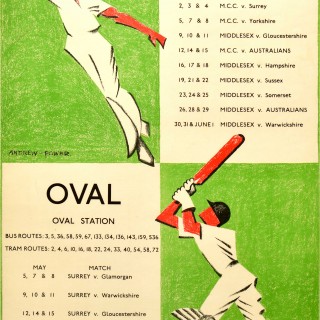 Original vintage sport themed London Transport poster for Lord’s Cricket Ground St. Johns Wood Station and Oval Cricket Ground Oval Station with bus and tram routes and the list of upcoming fixtures at both cricket venues including the dates and match details on two diagonal boxes with the London Transport roundel logo and the dynamic artwork by Andrew-Power of a cricket batsman leaning forward to hit the ball with a fielder in action reaching up to catch the ball in the other two diagonal squares against the green background. Andrew Power is the name of the partnership of two artists Sybil Andrews (1898-1992) and Cyril Edward Power (1872-1951). Founded by Thomas Lord in 1814, and known as The Home of Cricket, Lord’s Cricket Ground is located in north London and is owned by the Marylebone Cricket Club MCC; since 1922 the annual Eton v Harrow match has usually been held at Lord’s. Located in Kennington in south London, the Oval was founded in 1845 and is the home ground of the Surrey County Cricket Club; traditionally the final Test match of the English season is played at the Oval. Excellent condition, backed on linen. 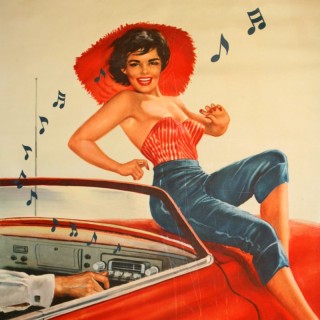