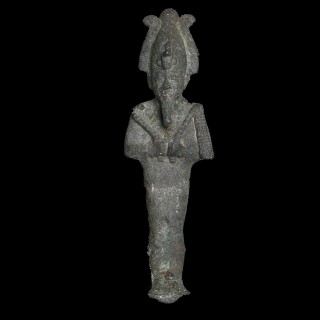 A finely modelled Egyptian cast bronze statuette depicting the mummiform god Osiris, portrayed wearing his standard attire, a close-fitted shroud. His wrists and hands poke out of vertical slits and meet in the centre of his body, just below his chest. He grasps a flail, nekhakha, in his left hand and a short-handled crook sceptre, heka, in his right hand. Osiris also wears the atef crown, consisting of the Upper Egyptian white crown flanked by two lateral plumes, and a uraeus, whose body extends up the crown. His body is mummified and presented on a square block base. The reverse features a suspension loop, suggesting that the statuette might have been worn as an amulet or placed in between the mummy’s wrappings.

Osiris was one of the most significant and important god in the Egyptians pantheon. He is known largely as a god of fertility and of death, becoming god of the underworld. He is usually depicted as a green-faced man, to declare his association with the dead. He appears dressed in a burial shroud and wearing the Atef crown. In his role of lord of the underworld he was associated with each pharaoh as he died and thus was portrayed as a deceased pharaoh, as he is depicted on this figurine.

Condition: Extremely fine, complete and intact. The piece has been mounted on a custom-made stand, ideal for display.