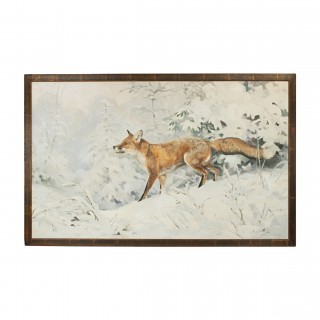 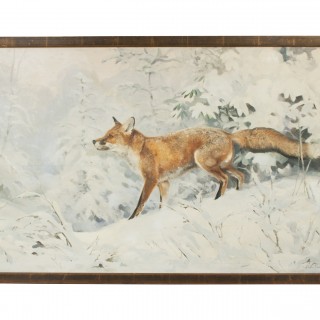 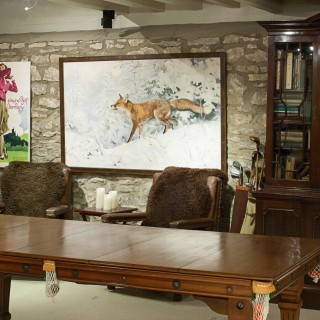 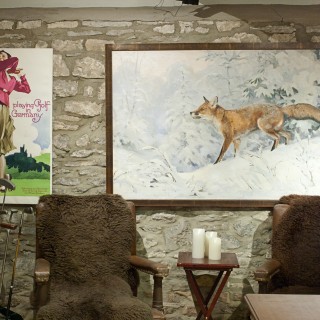 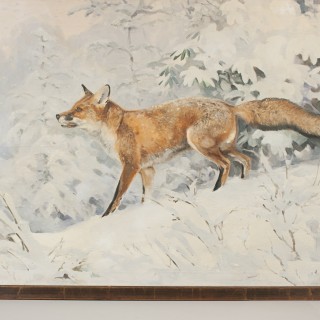 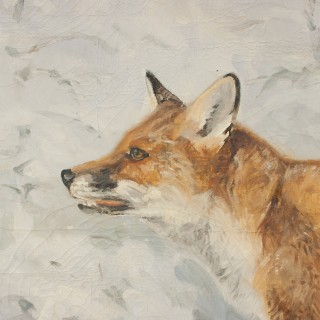 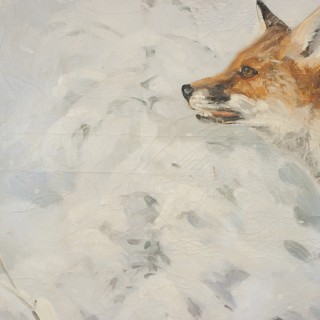 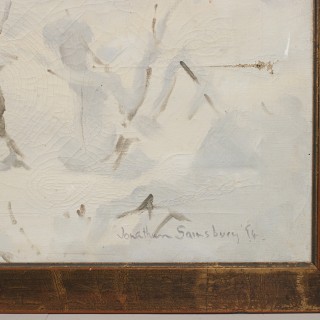 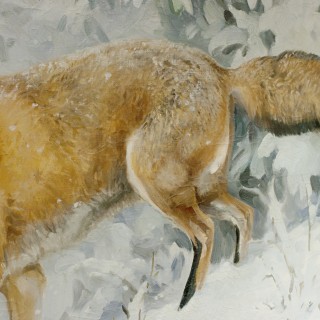 Painting Of A Fox In Winter Landscape By Jonathan Sainsbury

Born in Stratford upon Avon, Warwickshire, Jonathan Sainsbury grew up with close links to the Royal Shakespeare Theatre. He studied for a Pre-Diploma at Leamington Spa College of Art, followed by the Byam Shaw School of Art, before working in the Paint Shop of the Theatre and visiting Japan with the Company.
Jonathan read Fine Art at Leeds College of Art, graduating in 1976 with a show that included an experimental ‘man-powered flying suit’, featured in Young Northern Contemporaries Exhibition, 1976.
Jonathan returned to Warwickshire and began painting landscapes, often featuring game and wildlife he observed from life, encountered on walks with his springer spaniels.
William Marler of the William Marler Gallery, Cirencester, recognised the quality of his work and for many years hosted sell-out one-man shows, which attracted critical acclaim from the late Aylmer Tryon, founder of the Tryon Gallery and brought Jonathan to the attention of the Modern British Department at Christie’s, London. Harriet Drummond of Christie’s praised Jonathan’s field work and recommended him as one of just a handful of contemporary wildlife artists with long-term collector’s value.
Jonathan travelled in the Far East where he studied rare pheasants in their natural habitats, aided by the World Pheasant Association. He saw in the wild Lewis’ silver pheasants, thought at the time to be on the point of extinction.
Jonathan moved to North Devon in the mid-eighties, then to Perthshire, Scotland at the end of the decade.
When the William Marler Gallery closed in the early nineties, Jonathan began to stage one-man exhibitions in country houses. The first was at Scone Palace, Perthshire, in 1993, followed by Kissing Tree House and Foxcote in Warwickshire in 1994 and from 2003 – 2008 at the Long Room at Purdey, Gunmakers, London.
As his work matured, Jonathan successfully submitted it to public exhibitions: those with birds, wildlife or conservation themes and mainstream contemporary art shows.
With wildlife and landscape as his subject-matter, Jonathan was aware that wildlife photography and film-making was posing a challenge to artists. He saw that artists had to use the unique aspects of picture-making such as design, drawing, skill in handling paint, to say what only art could say. This led to his highly-successful Square Series, which won critical acclaim world-wide.
Jonathan was elected a Signature Member of the Society of Animal Artists in the United States and a Signature Member of the Artists’ Foundation for Conservation and regularly hangs with those groups as well as in the Society of Wildlife Artists exhibition in London. His work is recognised within Contemporary Scottish art circles where he has exhibited with the Royal Scottish Watercolour Society, the Aberdeen Artists’ Society and the Royal Glasgow Institute.
Jonathan exhibits in a number of contemporary galleries in Scotland and England, including the Brian Sinfield Gallery, Burford; Frames Gallery, Perth; Strathearn Gallery, Crieff; Wykeham Gallery, Stockbridge and Sculpture by the Lakes in Dorset. He has exhibited at the CLA Game Fair for years as a member of the Redspot group and at the Scottish Game Fair. He participates in Perthshire Open Studios.
In 2016, Jonathan created an installation, which he entitled ‘My Ark for Nature’. This combines painting on a theme of conservation, live demonstration and multi-media displays. He built a 6 metre by 3 metre timber stand, looking both like a shed and an ark. He incorporated blank paper panels, on which he drew, in charcoal, during exhibition, using sepia watercolours of British endangered wildlife and habitats which he had prepared beforehand. Around these framed sketches he clustered complementary finished works, so for example, around a Highland landscape, featuring a Scots pine and wildcat, he hung paintings of cross-bills, crested tits, red squirrels.
Bird boxes hung alongside paintings, showing clips of film of songbirds, provided by the Songbird Survival Trust, whose membership literature was displayed. Likewise, literature from the British Dragonfly Society decorated the stand along with Jonathan’s own limited edition postcards. Shelves displayed the working materials from an artist’s studio – primary sources like feathers, lichens, skins – books, poems, as well as brushes, pigments, tools. The stand was displayed first at the BBC Countryfile Live Event 2016 at Blenheim, where hundreds visited, then in Perthshire Open Studios, in St Serf’s church, Comrie, where 200 visitors came over five days, including pupils from Comrie primary school.
In June 2017, ‘My Ark for Nature’ will be displayed in the Lady Chapel at the Scottish Episcopal Church’s Cathedral in Inverness and open to visitors.
Jonathan’s work is displayed in national publications like Country Life and The Field as well as in sporting magazines. His work hangs in public and private collections world-wide.
Jonathan lives in Perthshire, working in a pine-lined studio with a corrugated iron roof.

Paint is cracked with a dent in the canvas by the foxes hind leg.

Painting Of A Fox In Winter Landscape By Jonathan Sainsbury